Exeter Branch Report: Mar to May 2019

On Wednesday 13th March (2019), former economist and journalist Philip Agar gave a fascinating talk at the Mint Methodist Church Centre (Exeter) based on his latest book Stumbling through wartime childhood*, which is part autobiography and part fiction. It deals with the story of a small boy growing up in Torquay during the war and his subsequent move to bomb-ravaged London in 1948.

* Philip Agar’s book is available in bookshops or can be obtained from Amazon or Lulu. Copies are also available directly from the author at an advantageous price (philipalgar@btintenet.com).

Originally from London, the author’s family moved to the Preston area of Torbay in 1939. However, his father, who was captain of an oil tanker, was captured in the South Atlantic early in the war and spent four years as a German POW.

He vividly described wartime Torbay, including some fifty-four air raids and bombs dropping near Oldway and on the Palace Hotel at St Marychurch. During this period there were many child evacuees whose surrogate families were paid ten shillings and sixpence a week for the first child. Naturally there were many social problems and everyone faced food shortages. He also recalled the experience of visiting struggling restaurants, improvised toys, and the allure of cigarette cards. People were also encouraged to keep pigs, notwithstanding the stench of the pigswill bins in hot weather.

Torbay was also a hub of troop movements: some 60,000 French troops were temporarily sent to Torbay after Dunkirk, and there were further influxes, including huge numbers of American forces, when the Slapton and South Hams areas were used for D-Day preparations. Many hotels were requisitioned by the Americans, and he retold the apocryphal (?) tale of a small boy who had fallen and hurt his knee being comforted by none other than Dwight Eisenhower who gave him an ice cream!

Philip Agar concluded his presentation by describing his father’s eventual return by train to Paignton at the end of the war, together with fellow POWs. 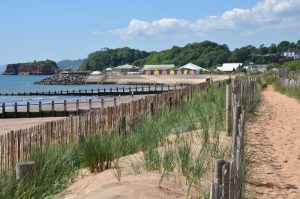 Our next event (Tuesday 14th May) attracted nearly 50 participants and was a joint Exeter Branch/South Devon Branch initiative entitled Dawlish Warren Day – a celebration of the magnificent, multi-designated and intensively studied sand spit at the mouth of the Exe Estuary.

To the physical geographer, Dawlish Warren is a double recurved spit that previously consisted of two amalgamated sand bodies separated by a former tidal channel known as Greenland Lake. The term ‘recurved’ pertains to the far end of the spit, which curves sharply back on itself in response to flood tidal currents and wave refraction.

The morning session at the Langstone Cliff Hotel began with coffee, followed by three talks. Tony Buller (DA) started by describing the configuration, creation and instability of the spit and the late 20th/early 21st century coastal defence works. The latter culminated in 2017 with a £14 million Beach Management Scheme* whose primary objective was to protect the middle estuary communities and railway from flood damage should the spit be broken up by extreme weather. He also explained that, unlike classic estuary mouth sand spits formed by longshore drift, Dawlish Warren is sourced by sand derived from the immediately offshore Pole Sand complex. Moreover, the smooth, continuous frontage of today results as much from man’s intervention as it does from nature. In the past the spit was far more irregular in shape and was occasionally compartmentalised.

* In response to extreme weather in 2014, which resulted in the railway lines at Dawlish Warren left dangling in mid-air, Teignbridge District Council and the Environment Agency, together with joint venture contractors Bam Nuttall and Mot Macdonald, undertook the 2017 Beach Management Scheme. Specific objectives were to: prevent the vulnerable ‘neck’ adjacent to Inner Bay from being breached using giant sand bags emplaced behind the dune front (geotubes); to protect a 2014 flood wall near the Visitor Centre from further damage; to allow the wind-blown dunes to return to their natural state by removing gabions; and to greatly improve the quality of the Outer Warren beach for holiday makers. 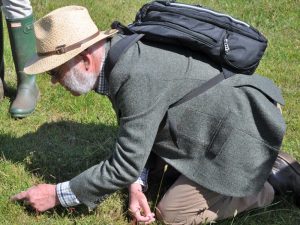 Jeremy Ison (DA) then summarised the special flora that are capable of adapting to the damp salty and sandy terrain*. He related wild flower species and communities to a comprehensive zonation of sand dune vegetation, extending inwards from the strandline (fore dunes, mobile dunes, dune slacks, semi-fixed dunes, dune grassland, acid grassland, dune heath, scrub and woodland). For example, the famous Sand Crocus Romulea columnae is found in the acid grassland and was thought to be unique to the Warren until it was rediscovered in Cornwall in 2002; and most of the floristic interest in Dawlish Warren is found in the dune slack communities of the former Greenland Lake.

* Interested readers should refer to Jeremy Ison’s Dawlish Warren section in the DA’s A New Flora of Devon, pp. 69-72. 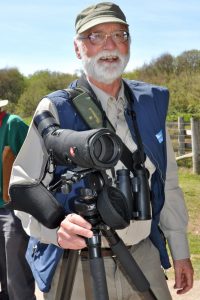 Nigel Hewitt (RSPB) rounded off the morning’s proceedings with a talk about the prolific birdlife. He told us that the Warren and environs is an important feeding ground for migratory birds from the Arctic, Europe and elsewhere, and birdlife in the Exe Estuary is second only in SW England to birdlife in the Severn. Bird lovers are catered for by a two-storey hide on the south side of Inner Bay, which looks out over the mudflats of the middle estuary, and more than 180 species have been recorded. Copious photographs of the birds were accompanied by recorded bird songs to the delight of those present.

After lunch, participants gathered outside the Dawlish Warren Visitor Centre where they were divided into three groups to examine the flora and birdlife first hand. Jeremy Ison, Nigel Hewitt and Exeter Branch Chairman Bob Hodgson served as field guides.

The date for this event was carefully chosen to ensure that the field walks would coincide with high water, which favoured the chance of seeing the birds at their best. What could not be arranged in advance was the weather, which happily turned out to be brilliantly sunny.