An ongoing series of short reports by written our Chair, Dr Sue Andrew, musing on discoveries made as she travels around Devon.

This follows on from Sue’s earlier series of reports made during walks from her Tavistock home during the full coronavirus lockdown. The fourteen earlier pieces can be read here.

When my three sons were growing up, we kept all manner of stick insects, including some rather wonderful spiny specimens from New Guinea – Eurycantha calcarata. We also spent hours hunting through Devon hedges and fields to spot their tiny inhabitants, as my grandsons, aged seven and four, do now. It is a real pleasure watching the boys’ faces as they examine the contents of the sweep nets their father made for them.

A frequent find in the hedgerows is Timarcha tenebricosa – the bloody-nosed beetle – so called as it exudes a red liquid when threatened. They are easy to spot, being one of our largest leaf beetles, yet if handled gently, are not disturbed by close scrutiny.

I have always rather liked beetles. In January, the DA’s Entomology Section asked its members to bring along to its AGM an insect-inspired cultural artefact, and so, rather belatedly, I would like to offer two of my own – a modern silk painting and an antique Tibetan cloth, also silk. 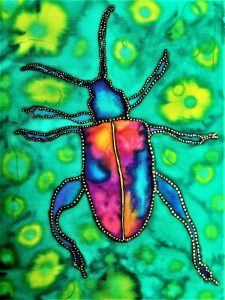 The silk painting I did for my son’s tenth birthday, nearly twenty-three years ago. I am not convinced that there is anything quite like it in the natural world – it was simply intended as a card for a budding entomologist who later changed course.

The Tibetan cloth is something of a mystery and I have not seen another like it. When we bought it in Edinburgh around forty-five years ago, I understood it to be a prayer cloth, and it does bear the eight spokes of the Buddhist prayer wheel. The spokes are decorated with gold thread and the iridescent wing-cases of an Asian wood-boring jewel beetle Sternocera aequisignata. In the nineteenth century, these wing-cases became so popular in fashion in England, that, in 1867, a consignment of 25,000 was sold in London (see https://collections.vam.ac.uk/item/O1387342/dress/). 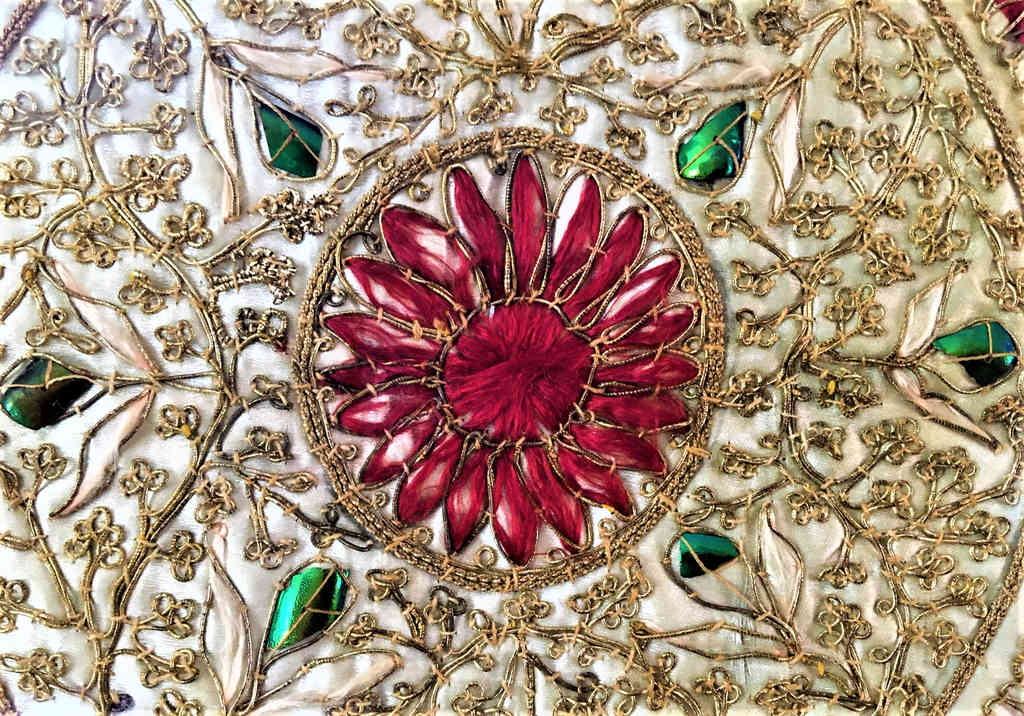 In the Autumn 2019 issue of DA News, Robin Wootton, DA President Elect for 2021-2022, wrote a powerful article ‘Insects: when will people realise they are fascinating?’. I’m with him on this – Devon has an abundance of extraordinarily beautiful and behaviourally interesting little creatures who are crucial to our very existence. I am determined to turn over a new leaf so I may understand them more. 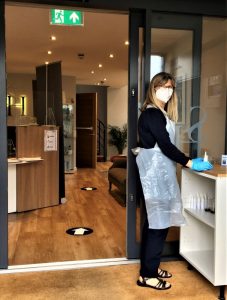 A visit to the dentist in an age of social distancing is quite unlike it was before. At my dental practice in West Street, Tavistock, last Tuesday, I was met at the door, had my temperature taken, rinsed my mouth and used a nasal spray containing iodine solution, sanitized my hands, put on a mask and cleansed hands again with soap and water, before venturing into an empty waiting room. Within two minutes, a masked and visored hygienist called me in for my appointment. It was her first day back at work since the middle of March, and though she was not able to use any mechanical device which would spread tiny droplets, she was as thorough and gentle as ever. Examination by the dentist thereafter proved similarly reassuring. 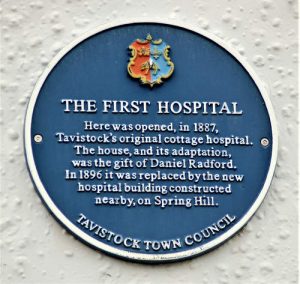 Dentists frequently use disclosing tablets to indicate plaque, but on this visit, it was another plaque that caught my eye. Fixed to the outside wall of the dental practice is a plaque which discloses the building’s history – it was converted from a dwelling into Tavistock’s first cottage hospital, which opened in 1887. Further research in The Tavistock Gazette, published on 29th July that year, reveals that the hospital was set up as a permanent memorial of Queen Victoria’s Golden Jubilee. It was noted that no infectious cases would be admitted. The Matron, Miss Daw, was described as the parochial lady nurse ‘who has won the respect and confidence of all who know her’. The hospital proved its worth, particularly in the treatment of injuries caused by accidents, but the building was relatively small, housing only eight or nine inpatients, and more space was soon needed. A new hospital was purpose built in nearby Spring Hill in 1896. 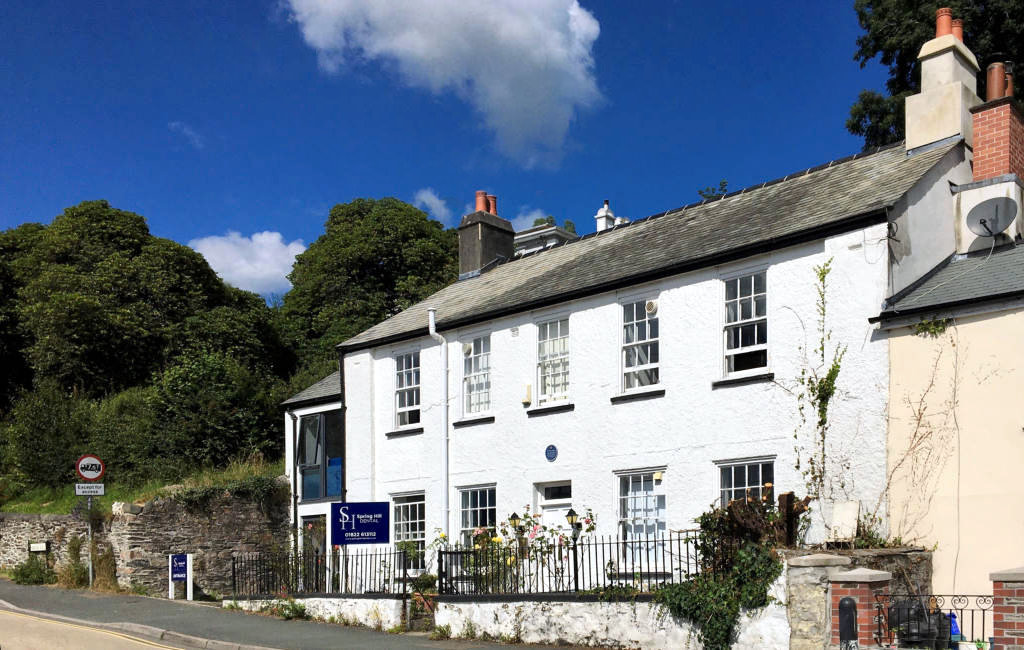 The building at 33 West Street may have changed since its inauguration as Tavistock’s first cottage hospital one hundred and thirty-three years ago, yet the discipline that Miss Daw brought to the hospital in those early days is still evident in the necessarily cautious approach adopted by the dental practice during the COVID-19 pandemic. In 1887 it was recorded that ‘A bright and cheerful aspect pervades the building throughout’. It does still and maintains an air of calming care of which Miss Daw would be proud. 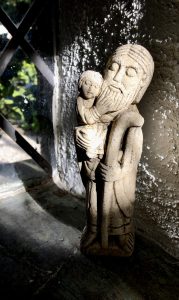 A small stone statue of St Christopher, bought many years ago by my mother, guards the front porch. I walk past it several times a day, but seldom really notice as it blends softly with the slate windowsill and a rough wall beyond. One evening the last rays of the sun caught it, highlighting the saint’s features and those of the small child whom he carries to safety. It reminded me of other images of St Christopher – medieval images which survive in our Devon churches and which were believed to protect their viewers from sudden death. 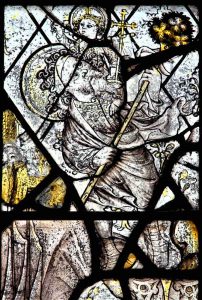 Every church had these images, mostly in the form of wall paintings on the north wall opposite the south door so that the saint would be seen immediately on entering the church. Although none of these survive in Devon, depictions of the saint in stained glass and wood are still to be found, if rarely. A fragment at Abbots Bickington church, from the fifteenth century, is exquisitely painted, and a roof boss in Burrington church may still have original medieval colour under a later brown varnish. 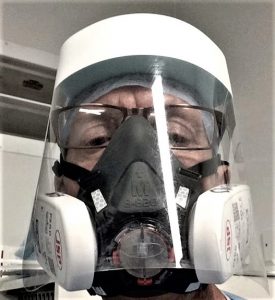 Recently, for me, the light has shone on another Christopher, my elder brother, who works as an Operating Department Practitioner for the NHS. With visor, mask and scrubs as his armour, together with his colleagues he strides through troubled waters to protect the vulnerable, at no mean risk to himself. He may not be a saint, but his cheerfulness and professionalism make him a source of great comfort to his patients, many of whom are fearful of what lies ahead.

Often we do not see as clearly as we might things or people with whom we are deeply familiar, and it is only when the light changes that their true qualities come into view. Perhaps that is one good outcome of this pandemic – that we now appreciate more fully all those who are there for us in times of trouble.

It is ironic that the Mayflower 400 commemorations, due to be held in 2020, should be put on hold by the emergence of a virus that has had such a devastating impact across the world. Four centuries ago, in the years 1616-1619, so just prior to the arrival of the Pilgrims in the ‘New World’, disease brought by previous European colonisers inflicted what has become known as ‘The Great Dying’ on the native peoples of the north-east coast. Sickness would also destroy the lives of many of the incoming settlers.

As I write, the Mayflower Museum on the Barbican remains closed, and The Box, Plymouth’s new cultural hub, will probably not open until September. But the glossy Official Mayflower 400 Commemorative Publication, edited by Robert McCall – 1620–2020, Mayflower 400, Steering our future, inspired by the past – gives hints of the shape of things to come, promising a much more nuanced account of events than has been presented in the past. For the first time, it says, the story will be told from the perspectives of both the newly arrived Pilgrims and the indigenous Wampanoag tribe, and it will, indeed, be fascinating to see how these histories will unfold in events and exhibitions. 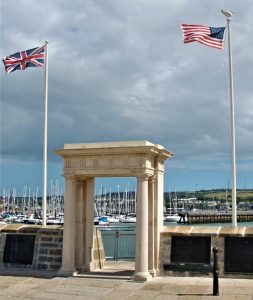 On the ground floor of the Mayflower Museum, in the Tourist Information Centre, alongside the Official Publication, may be found a small and significantly less glossy booklet: Danny Reilly’s and Steve Cushion’s Telling the Mayflower Story. Thanksgiving or Land Grabbing, Massacres & Slavery? (2018, Socialist History Society). As would be expected from its title, this work challenges many of the past retellings of the Mayflower story, and hopes it will ‘help to increase understanding and support in the UK, during the 400-year anniversary commemorations and beyond, for the ongoing struggles of the Indigenous Nations of North America, of African-Americans and of African-Caribbean peoples today’ (p.4).

At the present time, when disease and dis-ease are rife in communities both sides of the Atlantic, care, consideration, understanding and support for others is surely the way forward to a healthier future for us all. 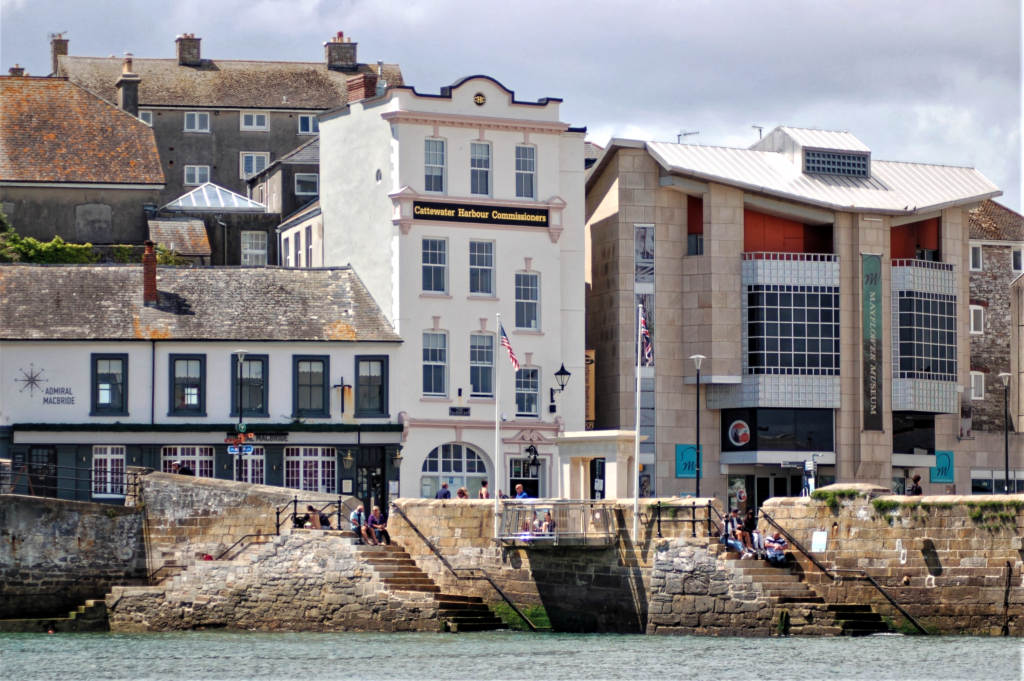 Visiting Widecombe in the Moor on a sunny afternoon in the middle of June is not something I would usually do, but this year is different. No coaches, the church, National Trust shop, pubs and cafés still closed, only a few people on the green, and chance to wander around without cars at every turn. Chance, too, to investigate a little building recently conserved under the watchful eyes of the Widecombe History Group – the old pig-house – and an adjacent memorial garden. Pig-houses were once common but fell into disuse and many of these humble buildings have been lost. This one has been given a new lease of life, with old artefacts used inside to tell the Dartmoor story. 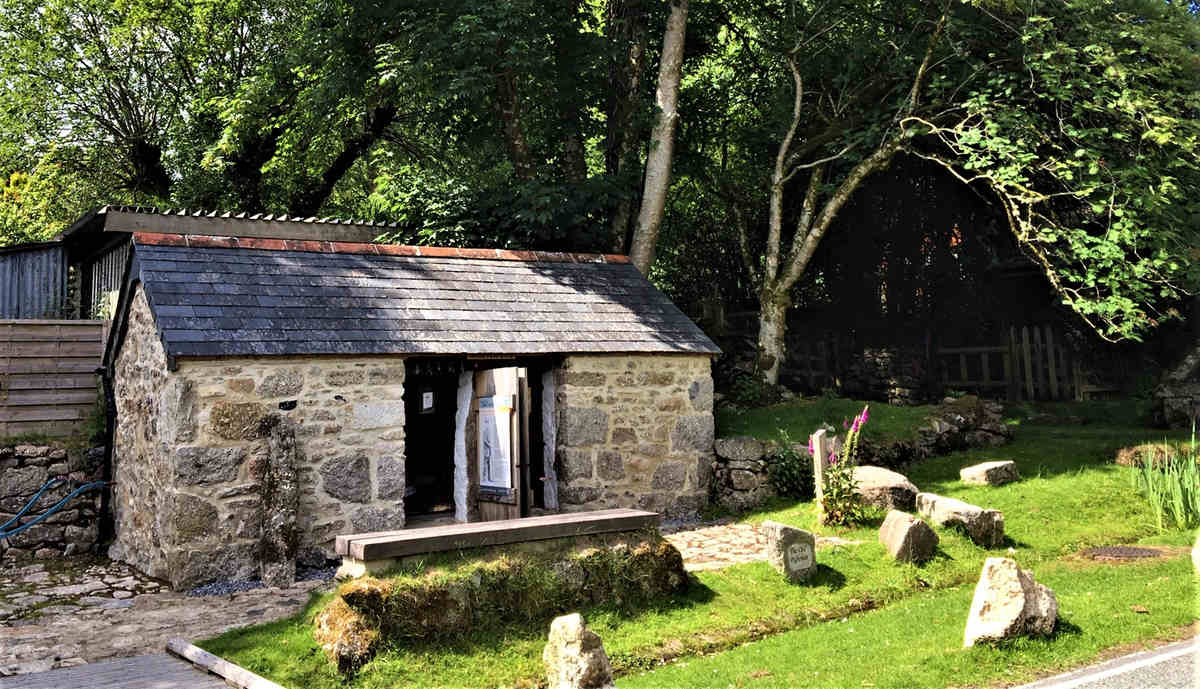 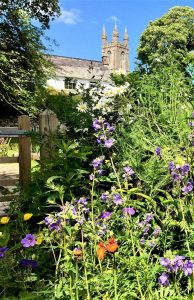 The small cobbled garden, planted with ferns, wildflowers, and old-fashioned garden plants, is a delight, with the church tower glimpsed beyond a profusion of greenery. Oak and granite benches, one dedicated to the memory of broadcaster, local historian and much-admired former President of the DA, Anthony Beard, provide the perfect place for quiet contemplation. On the day I visited, the peace was disturbed, but in the best possible way, as a flock of rooks soared and swooped over the treetops. I’ve always admired the sociability of rooks, and their craaking conversation, and on homecoming found the following in Sabine Baring-Gould’s Book of Dartmoor: 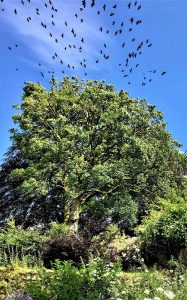 A visitor to Dartmoor in June or July will be surprised to find flights of rooks over it. As soon as their maternal cares are over, they desert the rookeries on the lowland and go for change of air and diet to the moor, where they feed on the whortleberry, possibly, but most certainly on the daddy longlegs [crane flies] and its first cousin, who is the hateful wireworm in his fully developed form. A friend one day saw a bit of the moor dense with rooks, and surprised at their movements and excitement, observed them closely, and discovered that they were having a glut of daddy longlegs (p. 255).

Although the pubs and cafés may still be closed (though not for much longer it seems) and the human visitors few, others are taking advantage of all Widecombe has to offer, and it makes for a spectacular sight.

All text and photos by Sue Andrew. Click on the photos to see larger versions.