An ongoing series of short reports by written our Chair, Dr Sue Andrew, musing on current life in Devon.

This is Sue’s third series of reports. Series two can be read here, and series one which was made during walks from her Tavistock home during the first coronavirus lockdown can be read here.

Venturing out on a cold dark evening may not always seem enticing, but it brings its own pleasures. Strangely it sharpens the focus, for background noise, both aural and visual, is reduced, making it easier to appreciate the history and heritage of our environment and aspects of the natural world that elude us in the day.

Recent evening walks in Tavistock have presented some memorable images. Figures hurrying through rain and mist along the old wall that marks the southern boundary of the precinct of long-gone Tavistock Abbey, pussy willow glowing against a blackened sky near the canal, bare branches coiling around a street-lamp, and, most surprisingly, an otter swimming in the clear waters of the River Tavy, just a stone’s throw from Abbey Bridge. 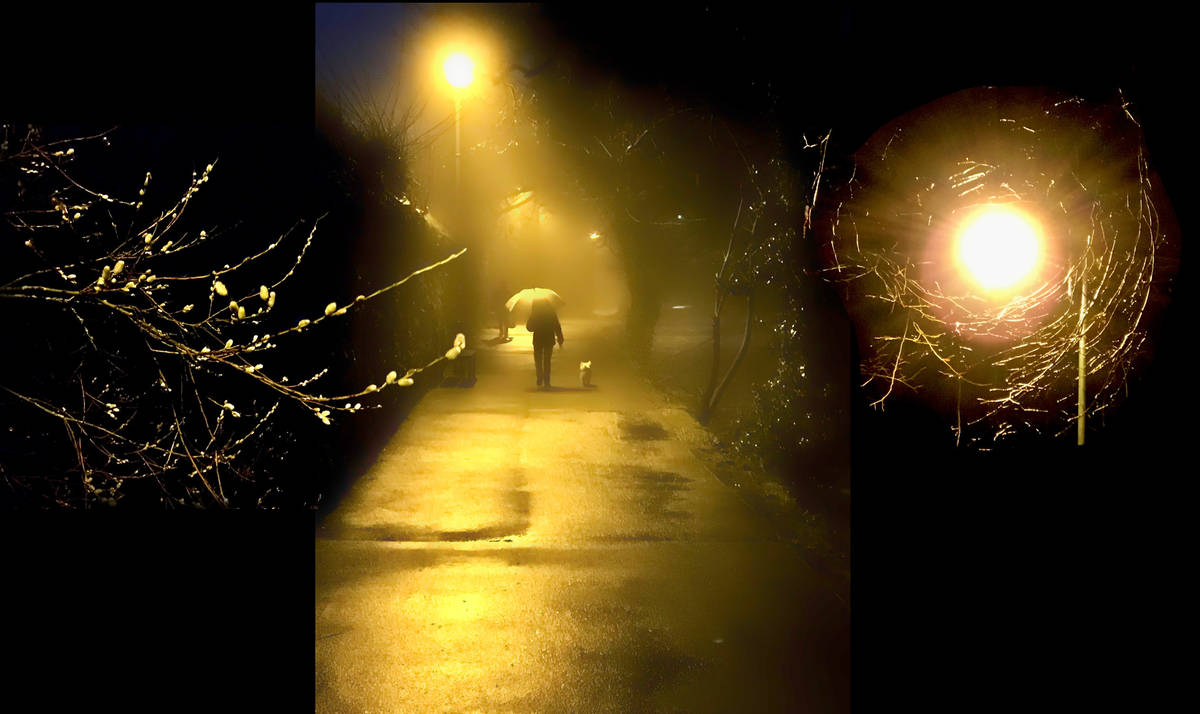 I have never seen an otter in the wild before, and it was quite unexpected in the middle of town. But an otter it certainly was, and it raised its head above the water before slipping beneath the surface again to continue its journey downriver. Although I didn’t have my camera with me that evening, and the moment did not last long, it’s an image that will stay with me forever.

In Tavistock, we are fortunate that our streets are relatively safe. The dark, or rather what it may hide, can, understandably, be frightening for some people, yet it would be a sad day if we could no longer venture out after sunset to witness the world around us, for dark can be steeped in wonder and beauty. 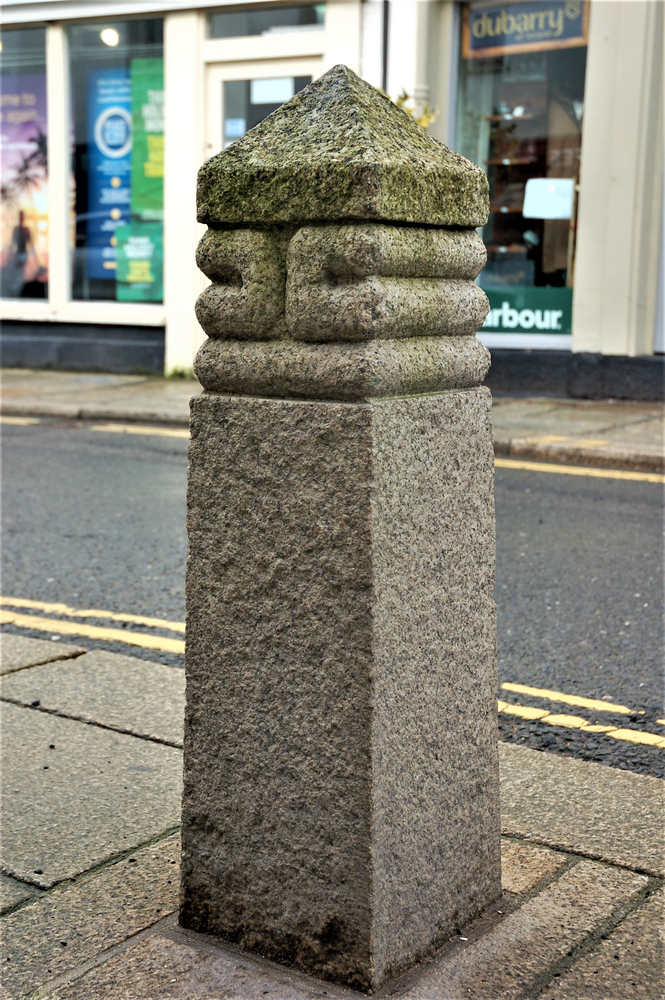 Walking from home every day in the latest lockdown, my path takes me along the streets of Tavistock past six granite bollards. Bollards do not generally demand our attention – indeed, they are usually objects to be avoided at all costs – and most people pass the Brook Street bollards without a second glance. But these granites are finely sculpted, and there is an air of familiarity about them – a recognition that they may be related to other works of sculptural distinction.

An email to internationally-renowned Drewsteignton-based artist and sculptor Peter Randall-Page, and an ensuing conversation, provided the backstory to the bollards. Peter explained that he worked the granite in 1996, with the intention that the posts would form part of a much larger scheme involving the redesign of parts of the centre of Tavistock.

Research into towns and cities across Europe had suggested that where areas had been pedestrianized, or at least where traffic had been reduced, footfall increased rather than decreased. Thus a plan was drawn up for an area outside Tavistock Town Hall, inspired by the scallop-shaped piazza in Siena, with the intention of providing an attractive user-friendly space featuring a Dartmoor granite water sculpture and newly-planted trees.

But it seems that Tavistock some twenty-five years ago was not ready for such change. One local councillor stated that: ‘A “feature” will be planted in front of the Town Hall. The present idea is for a “water feature”, probably some sort of fountain. I should have thought that the Town Hall was feature enough…’. So the plan came to nought, and although the area outside the Town Hall was eventually paved, the bollards in Brook Street are now the only tangible outcome of Peter’s involvement with the scheme.

I am probably not alone in thinking that a significant sculpture by Peter Randall-Page, set among trees, would have added to the appeal of Tavistock’s Bedford Square. Sensitive to its place, as all of Peter’s sculptures are, it would have added a distinctive twentieth-century touch to the worked granite of the nineteenth-century Dukes of Bedford. 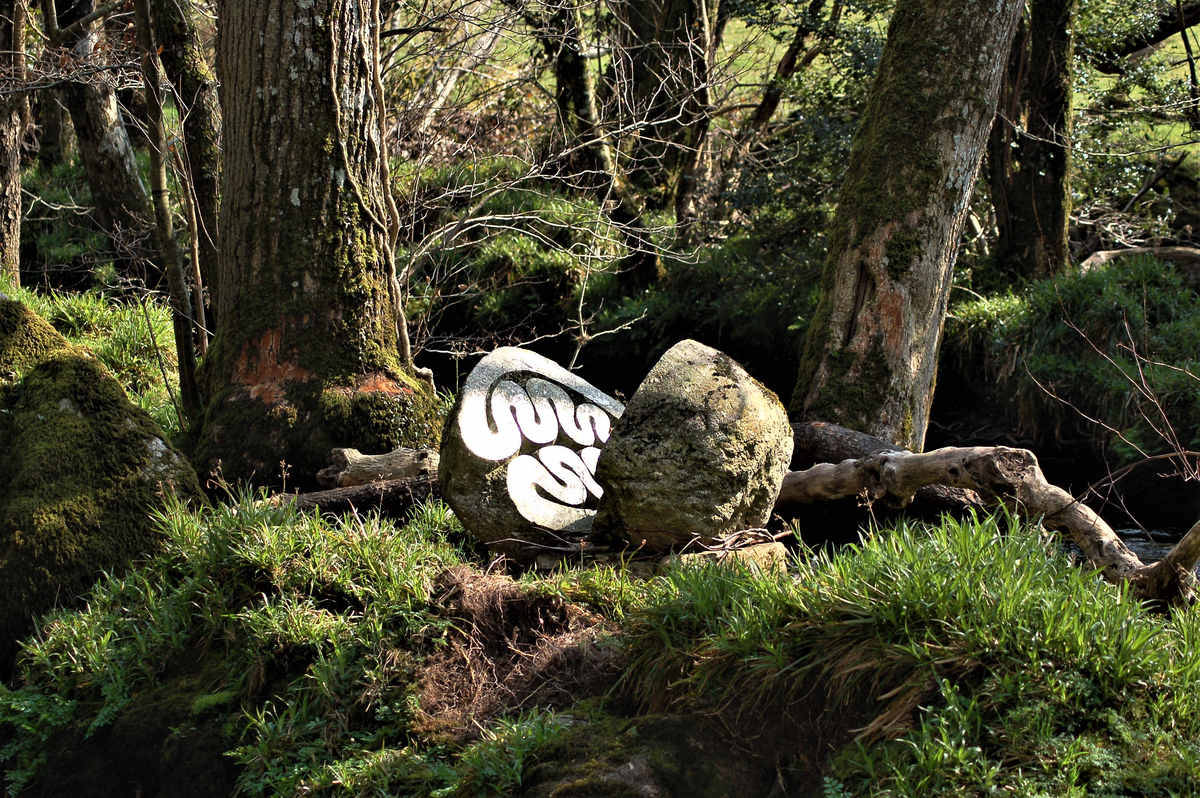 Peter Randall-Page’s Granite Song (1991). Produced in association with Common Ground, it is situated on a small island in the middle of the River Teign on private land but visible from the ‘Two Moors Way’ footpath between Drewsteignton and Chagford.

Now a Royal Academician, Peter’s work, inspired by geometric patterns in the natural world, is justly admired across the globe. While Tavistock has some striking bollards, one can’t help but wonder what might have been…

It has long been known that the natural world soothes the soul and throughout this winter we have needed that more than ever. For those unable to connect with nature directly, the power of digital resources is being explored in a study by Exeter University PhD researcher, Alex Smalley (see https://virtual-nature.com/). Alex’s work investigates how virtual experiences of nature impact health and wellbeing and was featured recently in the local news and in the BBC’s Winterwatch programme.

Two males, the near one a juvenile coming into plumage and the rear one an adult in eclipse plumage

I am fortunate in having the River Tavy bordering my garden and so there is a constant sense of being part of the natural world. Mallards abound, kingfishers flash under overhanging branches and dippers bob in search of food, but it is the graceful goosander that has captured my imagination this season and I have spent many hours watching this beautiful bird.

These sleek, streamlined ducks are first recorded as breeding in the UK in Argyll in 1871. From Scotland their territory has gradually spread south and west until colonization of Devon was confirmed in 1980. The spread of goosanders to the south west is interesting given that adult males migrate to north Norway to moult in the summer months.

The goosander is not, however, universally loved. Its serrated beak points to piscatorial pursuits which bring these birds into conflict with some humans. The goosander will take, among other fish, young salmon and sea trout, and although protected under the Wildlife and Countryside Act (1981), licences to cull have been issued in Scotland where cases of serious damage to fisheries have been cited. This is controversial, but in Devon, for the moment at least, goosanders are relatively safe. I hope that remains so, for many welcome the presence of this handsome bird in our rivers and lakes and delight in watching it ducking and diving.

Identifications of the images provided by Stella Beavan.

All text and photos by Sue Andrew unless otherwise stated. Click on the photos to see larger versions.