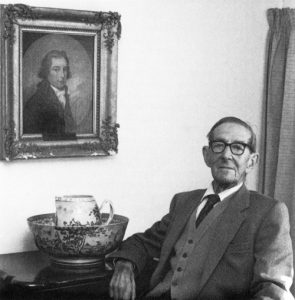 Members who attended the Annual Meeting of the Association in Tiverton in 1974 will recall with pleasure the inauguration of Sir Richard Acland as President, and the memorable Presidential Address he gave on that occasion. Taking ‘Six Generations of Change’ as his theme, Sir Richard argued that change ‘does not take place by benign consensus of all concerned’ but ‘emerges out of a struggle of contrary ideas and opposing intentions’, to which he added the comment that ‘there is a continual and mutual interaction between the material things around us and our own ideas, feelings and beliefs’. This, he worked out through a close examination of the contribution made, through six generations of his own family, in public life and to the development of education in this country from the eighteenth to the twentieth century.*

* Much of this was derived from the researches of Anne Acland, and subsequently published by her in A Devon Family (Phillimore, 1981).

We are all the poorer for the death of this philosopher, educationalist, politician and polymath on 24th November, 1990.

Richard Acland is probably most widely remembered for his magnificent gesture in securing the future of his extensive family estates at Holnicote and Killerton by vesting them in the National Trust in 1944. This, it has been said, provided a great boost for the National Trust and enabled Sir Richard to share his inheritance with others in a way compatible with his own deeply held social and religious beliefs.

Born in 1906, Sir Richard was educated at Rugby and Balliol. Being descended from a distinguished line of independently minded Members of Parliament, it is not surprising that he stood for seats in Torquay in 1929 and Barnstaple in 1931, winning the latter seat (North Devon) in 1935. He entered the Commons as a Liberal and quickly became identified by his strongly felt anti-fascist views. He remained the member for North Devon until 1945, by which time he had become leader of the Common Wealth party in the Commons. This party grew up during the war years, advocating common ownership for moral and not merely for economic reasons. After its defeats in 1945, Sir Richard joined the Labour party, winning the Gravesend by-election in 1947. In 1955 he resigned his seat in protest against Britain’s decision to make its own H-bomb, which Labour leaders refused to denounce. In the general election which followed he fought as an Independent, but lost his seat.

A new career now opened up for Richard Acland in education, and after four years at Wandsworth Comprehensive School, he joined the staff of St. Luke’s College, in Exeter. Here, among other things, he became Warden of the student hall of residence established at Killerton, where having the house alive with young people gave him great pleasure. When he retired, the then Principal described Sir Richard as having been appointed as a ‘catalyst’ and that in many ways sums up the role which he filled in the College community for a number of years. In those days we had year lectures in the old St Luke’s Theatre, many of Richard’s were spectacular and he was one of the few lecturers ever to have enjoyed an ovation, from four hundred students, at the end of a session.

During these years Sir Richard Acland published a series of dynamic books, the best remembered of which, in the educational field, were ‘We Teach Them Wrong’ (1962) and ‘Curriculum or Life’ (1966).

During his year as President of the Devonshire Association, members greatly appreciated the way in which he and his wife, Anne, identified themselves with the activities of the Association. We were privileged to have had him as our President, and we mourn the passing of a much respected and loved man.