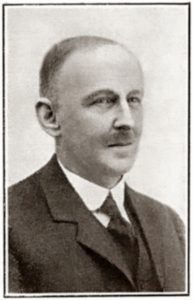 JOHN JAMES ALEXANDER, M.A., F.R.Hist. SOC., J.P., was the eldest surviving son of Joseph Alexander, J.P.; his mother was Mary Frances Gouldsbury Long, daughter and heiress of Francis Gouldesbury Long, M.D., of Heath Hill, Co. Donegal. Mr. Alexander was born 12th November 1865 at Imlick House, near Carrigans, in the same county, and went to school first at the Academy and then at Foyle College, in Londonderry, from which he proceeded to Queen’s College, Belfast in 1883, and St. John’s College, Cambridge in 1887. During the period of his education he won at least thirteen exhibitions and scholarships, in mathematics, physics, and chemistry. He took first class degrees at the Royal University of Ireland in 1886, 1889, and was finally eighth wrangler at Cambridge, in 1890, proceeding M.A. of the latter university in 1895.

In the same year he became head master of Tavistock Grammar School, and remained in that office till his retirement in 1928. Here he founded the cadet corps, and was captain of it from 1917 to 1928. During his residence in that town he was Chairman of the Urban District Council, and took a prominent part in the drafting of the Council’s Act when much of the Duke of Bedford’s property was taken over by the town; in this connexion he gave evidence before Committees of both Houses of Parliament. He was appointed a Justice of the Peace in 1912, and in 1922–23 was Chairman of the Exeter Branch of the Historical Association. At one time he was Chairman of the Devon and Cornwall Headmasters’ Association.

In Tavistock he had always taken the most active interest in local affairs and history; in his retirement his interest in such things remained undiminished, but his activity was somewhat decreased by advancing age.

When he joined the Devonshire Association in 1909 as a life member Mr. Alexander at once made his mark as a historian, particularly of the Anglo-Saxon period, as it affected Wessex and Devon. Some sixty of his papers have appeared in the Transactions, and the last of this long series will be found in this volume. The papers and reports are noteworthy for straightforward English, logical argument, and the unmistakable pleasure he took when he could expose any fabulous belief, however popular. His mathematical training gave him great help in this. He was a most painstaking worker, of accurate scholarship and sound judgement.

He served on the Council of the Association for more than thirty years; was President of the Paignton Meeting in 1932, Hon. Editor of the Transactions in 1931 and 1932; and for many years Reporter on Early History and on Parliamentary Representation, and the Association’s representative on the South Devon Regional Planning Committee.

He married in 1895 Miss Alice Martha Uran, younger daughter of Mr. J. P. Uran, of Mannamead, Plymouth, who survives him, together with his children, Arthur Francis Alexander, Assistant Director of Education for the County of Dorset; J. L. M. Alexander, A.M.I.C.E., now a Captain in the Royal Engineers and serving abroad; and a daughter, Sylvia Mary, the wife of Squadron Leader A. H. Goldie, R.A.F.

Mr. Alexander died 17th July, 1942, after an illness of several weeks, at the residence of his son-in-law at Paignton.