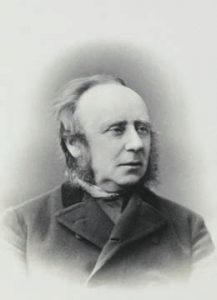 Two of the three Founding Fathers of the Devonshire Association were elected to Fellowship of the Royal Society, the mark of outstanding scientific excellence in Britain. William Pengelly is widely recognised as a geologist and a pioneer of Palaeolithic archaeology, but Charles Spence Bate, the Association’s equally distinguished second President, is far less well known today.

Bate was a Plymouth dental surgeon, the most respected outside London. He published prolifically in dental journals, and his classic book on the pathology of tooth decay is now available online. He was a President of the British Dental Association and of the Odontological Society – the first from outside the capital.

But his FRS was not awarded for dentistry. He was in his time the foremost authority – possibly in the world – on Crustacea, the immense animal group that ranges from tiny planktonic copepods to giant crabs via shrimps, woodlice, and barnacles, on which latter he corresponded with Darwin, a specialist in the group. His mammoth report on 2,000 specimens from the Challenger expedition of 1873-6 took him ten years, and his two volume monograph, with the entomologist J. O. Westwood, on the British sessile-eyed Crustacea was the standard work for more than a century.

His contributions to the Transactions reflect other interests: archaeology, particularly that of Dartmoor, and geology and evolution. His Presidential Address, given just three years after the publication of Darwin’s On the Origin of Species, addresses with great erudition the highly topical issue of the evolution of man, and is fascinating reading.

Spence Bate practised dentistry until his final illness. A year before his death in 1889 he assisted Sabine Baring Gould (DA President 1896) in the early stages of the latter’s folk song collection by introducing him to two singers of traditional Devon songs in South Brent; another small contribution to scholarship by this remarkable, versatile man.