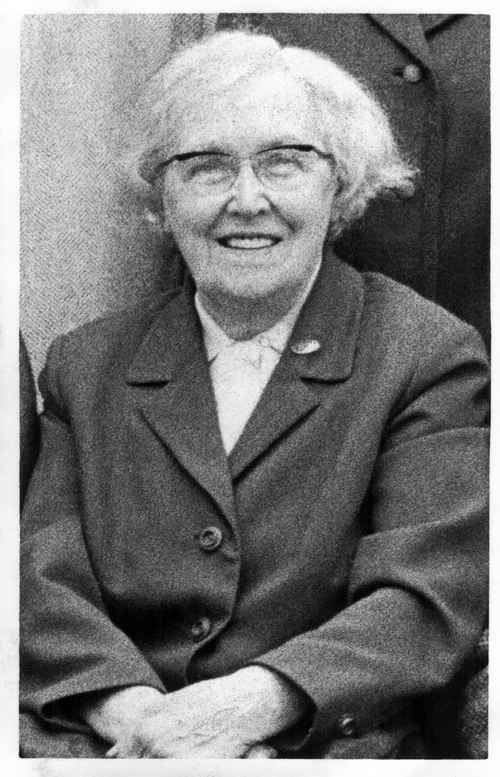 Margaret Campbell Speke Cruwys was a Devonian by marriage. She was in her teens when she came with her parents, Colonel and Mrs. Abercrombie, from her native Scotland to live in the Westcountry.

In 1917 she married Lewis George Cruwys of Cruwys Morchard House, and from that time she made his county her own, and studied its history, archaeology and legends. She knew the countryside intimately.

No one could have served the county of her adoption better or more happily. Her study of documents began at home where the tenacious Cruwys family had amassed family papers and deeds dating back to the 12th century. Her life’s work was the collation, translation and transcription of the Cruwys records, undisturbed since 1790 until her and her husband’s work on them from 1926. Her interest in the past was human, odium archaeologicum was unknown to her; she was a friendly person with a rare and kindly sense of humour, a gifted speaker and a skilful chairman. In 1931 she joined the Devonshire Association and served on its Council from 1936 until within a year of her death. She was Chairman of Council from 1949 to 1952 and again from 1957 to 1965, and she was Secretary of the Parochial History Section. She was also a founder member of the Tiverton Branch and its Vice-Chairman in 1961 and 1962.

As our President at the Tiverton Annual Meeting of 1952, she gave a well documented and entertaining address on Records at Cruwys Morchard, and she and her husband entertained us kindly at the House. Mrs. Cruwys was Secretary for Devon of the National Register of Archives. She toured the county addressing Women’s Institutes, talking about the history of their parishes, and urging them to seek out documents of historical interest and place them in safe-keeping.

For years she was a member of the Devon and Exeter Institution having been its honorary secretary from 1962 until 1965 and its President in 1966, the second woman to be elected to that honour since the Institution’s foundation in 1813.

Mrs. Cruwys took an active interest in county activities from the Cruwys Morchard Flower Show and Young Farmers’ Club to Tiverton Museum, Tiverton Memorial Hall, and from Queen Mary’s Needlework Guild to Air Raid Precaution in the War and Civil Defence after it. She also worked for the Mental Health Appeal, the Save the Children Fund and the Marie Curie Memorial Foundation at Tidcome Hall. In 1950 she was elected to the Society of Antiquaries, and just before her death she was made a Cornish Bard in recognition of the good work she had done in editing Devon and Cornwall Notes and Queries for 37 years.

In 1962 she moved to 31 St. Peter Street, Tiverton, where for four years she enjoyed a life of happy activity. Her last year was one of increasing ill-health and reduced vitality. She died at home and is buried with her husband, who died in 1957, at Cruwys Morchard. Her memorial service on the 20th March 1968 at St. Peter’s Church, Tiverton, was well attended by civic authorities and by her friends and neighbours. The Bishop of Crediton, the Right Reverend W. A. E. Westall, then President of the Devonshire Association, preached on the parable of the Good Samaritan with special reference to Margaret Cruwys, her life of service to good causes and her whole-hearted commitment to her chosen path of study and human kindness, grounded in faith and lightened by her unique sense of humour.