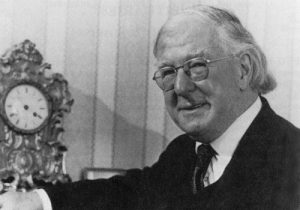 Professor W. G. Hoskins
President of the DA in 1978

W. G. Hoskins, one of England’s greatest economic and social historians, pioneered the subject of landscape history and revolutionised the study of local history. But, as the success of his two major television series in the 1970s suggested, his larger achievement was to have left us all incomparably richer in our understanding of the past all around us.

Devon played a large part in all this. Born in Exeter in 1908, the son and grandson of Exeter bakers, Hoskins was educated at Hele’s School and the University College of the South West. From his earliest years he developed a passionate interest in the Devon landscape, which provided much of the raw material for his thinking and writing. He began to ask questions about the apparently ordinary elements of the local landscape: its field banks and boundaries, its deep sunken lanes, its isolated farmsteads hidden down long muddy tracks.

When his academic career took him to Leicester in 1931, he applied his intense powers of observation to the Midland landscape which presented important contrasts with Devon. His Leicester years, though interrupted by wartime government service in London, were as productive as his Devonian background was formative. During this period he established the highly regarded School of English Local History and wrote some of his best books. In 1951 he moved to Oxford as Reader in Economic History. Although not at ease with many aspects of Oxford academic life, he had immense influence on hundreds of students well beyond his faculty boundaries, and established his national reputation with the publication in 1955 of his most influential book, The Making of the English Landscape. Returning to Leicester as Hatton Professor of English Local History in 1965, he found the changed atmosphere uncongenial and, as his famous Who’s Who entry records, he ‘retired in despair’ in 1968.

But retirement meant return to Exeter where he had kept a house during his Oxford years. There was to follow a decade or more of deep satisfaction, expressed in his letters to friends at the time written ‘from the Elysian fields’ or ‘from the shores of paradise’. His two BBC television series on English landscapes made him into a national figure with an international following. These programmes struck a chord with millions of people whose eyes were opened to their own local landscapes—and the threats to them. It was a surprise to Hoskins to have achieved such acclaim, a tribute to his own genuineness, for he could never be anything other than what he was.

He was never content with academic history per se: for Hoskins, the past had much to teach us if only we would take the trouble to look, see and understand. Hence his history comes alive with telling contemporary references, often expressing his concern for the living conditions of ordinary people, and his disdain for unearned privilege and the unfair distribution of wealth. He had a real gift for writing, often movingly, sometimes beautifully, bearing out his own thesis that ‘poets make the best topographers’. The combination of poetic insight, passionate love, painstakingly detailed research, and an abiding concern for a civilised, sane society that he saw typified in provincial England, makes his best writing great literature as well as great history.

His deep commitment to Devon and Exeter was, at times, costly. In the 1960s he had been elected a City Councillor in Exeter where he fought a tenacious battle with the City Council over the needless postwar destruction of the historic city, famously castigating the City Council for doing more damage than Hitler’s bombs. His concern for the protection of the historic environment from what he called ‘the barbarians’ was also expressed in his presidency of the Dartmoor Preservation Association for many years. For a decade, from 1968-78, he was Historic Buildings Consultant to Devon County Council, prepared to give evidence at local planning inquiries to preserve modest historic buildings; a reflection of his immense contribution to the development of vernacular building studies nationally. It greatly pleased him to have been President of the Devonshire Association in 1978.

While most of his writing includes Devon information and references, Hoskins left an impressive corpus of specifically Devonian books. Although he never wrote the major history of his native city that he intended, 2,000 Years in Exeter is a small masterpiece which portrays the essential historic formation and character of a leading English provincial town. But perhaps his very best literary and historical achievement is Devon, published in 1954. This magisterial survey combines a lifetime’s research, the insights of a major historian, and a profound attachment to the landscape he loved, producing not just the very best history, but many passages and descriptions of rare, moving beauty.

In all this, the unfailing partnership with Jane was of supreme importance: The Making of the English Landscape is, fittingly, dedicated to her. To know William and Jane’s friendship was a blessing many enjoyed. In the difficult final years, the strength of their partnership was faithfully reflected in their daughter Susie’s and her family’s care and love for them both. Jane survived William by but four months.