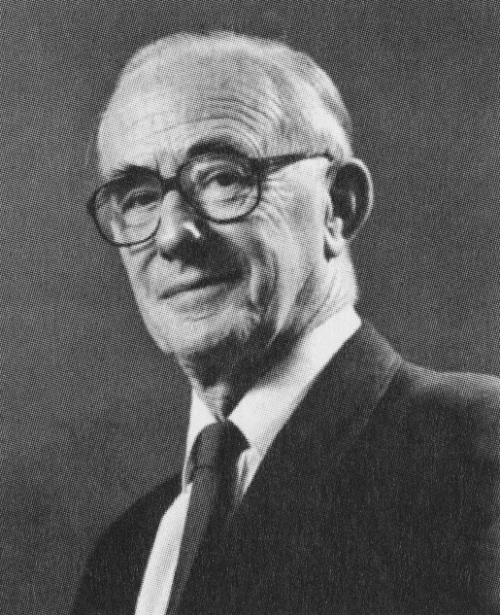 We record with sadness the death, aged 93, of Dr Murray Laver, a longstanding member of the Devonshire Association, and its President in 1990-1991.

Murray was born in Devonport in 1915 into a family with a long maritime tradition. His paternal grandfather was in the Royal Navy. His father, Clifton Laver, was variously a skilled shipwright, a navy diver, and a self-taught mathematician, who ended his career as Inspector of Timber at the Royal Navy Dockyard, Chatham.

This versatility is reflected and exceeded in Murray’s own extremely distinguished career. He entered Plymouth College in 1925 as a scholarship boy, and later vividly remembered arriving in this public school with a strong Devonport accent and no Latin, Greek or trigonometry, and being kept in repeatedly until he had developed perfect copperplate handwriting. In 1933 he moved to Medway Technical College, preparing for various civil service entrance exams. He came first in the national entrance exam for the Post Office, and in 1935 went to work as an electronic engineer at the Radio Branch of the Post Office Research Laboratories in Dollis Hill, where he remained for the remainder of the 1930s and the 1940s. During this time he worked on very accurate quartz crystal clocks, resulting in what was known as the Booth-Laver type of clock in 1940, refined by 1943 to an accuracy of one part in 108. The Booth-Laver design was adopted in 1942 by the Greenwich Royal Observatory, home of Greenwich Mean Time, the first quartz crystal clock to replace the free pendulum clock they had been using before this. While doing war-related research during the day Murray served as an Air Raid Warden at night during the London Blitz.

In the 1950s, Murray became heavily involved in computers and was in due course transferred to Post Office Headquarters in London, where his expertise became increasingly important; the British government was becoming a major buyer and user of computers. During this period, he travelled several times to the USA on ocean liners to inspect and evaluate computers. He was intimately involved in the launching in 1957 of the first Premium Bond computer, ERNIE, as well as the first computerized billing system for the British telephone service. He was an early advocate of the role of computers in commercial, as well as in academic and scientific applications and recalled rejecting the judgment of others in the early 1950s that there was a demand for perhaps only 10, really powerful, computers worldwide, located in major research centres. With far more powerful computers now commonplace in most homes, it is strange to realise that this was at the time a widely-held view.

During the 1960s and 1970s Murray rose through the ranks of the civil service, one of the first breed of ‘technocrats’ to do so in a service where technocrats had traditionally been seen as a lower caste. He did this first on secondment to HM Treasury and then, with the rank of Assistant Engineer in Chief, at the new Ministry of Technology formed as part of Harold Wilson’s ‘white hot technological revolution’. He worked closely with Frank Cousins and then Tony Benn as ministers, both of whom he remembered fondly. He was involved at this time in extensive and intensive negotiations about consolidation of the British computer industry in the face of increasingly vigorous US competition.

In the late 1960s, he moved back to the Post Office, becoming Director of the National Data Processing service and then joining the Board of the Post Office, as the member responsible for computing, when this was transformed from a government department into a nationalized industry. His biggest and most high-profile project during this period was LACES, the London Airport Cargo Electronic DP Scheme, commissioned in 1972 as one of the first big ‘on-line’, as opposed to batch, commercial computing applications, involving over 250,000 lines of computer code and about 340 person-years of programming effort, an immense project at the time. LACES gave importers and exporters remote terminal live access to information on cargo handling and customs clearance at London Airport. He was also responsible for persuading the British government to fund the high speed data link between Britain and Norway that connected Britain to ARPANET, which became the internet. In 1971 he was awarded the CBE for services to the British computer industry.

On his ‘retirement’, in July 1973, Murray and Kate moved immediately back to Devon, first to Sidmouth and later to Budleigh Salterton. Murray’s career continued. From 1974 to 1980 he was a member of the Board of the National Research and Development Corporation. In 1975 he became Visiting Professor in Computing at the University of Newcastle. From 1981 to 1987 he served as a particularly able Pro-chancellor of Exeter University. In 1988 the University awarded him the Honorary degree of Doctor of Science. And in 1990 a building, appropriately at that time housing the University’s central computing facility and Mathematics Department, was named after him.

He became deeply involved in Devon life: in the Sid Vale Association; and particularly in the Devonshire Association, which he joined immediately on retirement. He was the DA’s Recorder of Dialect from 1986 to 1995, and exceptionally active in the role, collecting and recording dialect examples from all over the County, and publishing them: annually in the Transactions; in a paper in the 1989 volume analysing the results of a survey conducted through the Devon Federation of Women’s Institutes of local words for 14 common items; and in the Devon Dialect Tapes, produced by the Association in 1994 and 1997, and since reissued as three fascinating and amusing CDs. He also left manuscript lists containing hundreds of entries. He was President of the Association in 1990/1, and his presidential address, on ‘Science and the Devonshire Association’ was one of the very best in recent years.

Murray Laver was a remarkable man, whose breadth of interests and talents recalls the polymathic personalities of the Association’s early years – Bowring, Kingsley, Spence Bate, Pengelly. He was a pioneering, visionary computer scientist; author of nine books on physics, computing and information technology; a major, scholarly contributor to the study of Devon dialects and their variations and distribution through the county; the author of papers in the Devonshire Association Transactions on Sidmouth ‘shingle’, the origin of beach cusps at Sidmouth, the history of the Sid Vale Association, the Dartmoor books of Beatrice Chase, and the life and work of the great Devon mathematician William Kingdon Clifford. He contributed to the DA’s book on Sir John Bowring – the Association’s first President and another dialect scholar, among many other things; and some poems to the Anthology ‘Leaves’.

Murray died on 28 November 2008 in the Old Vicarage, Otterton, where he had lived since 2004. Despite declining health resulting from chronic leukaemia, his mind remained razor sharp to the end and he continued to read voraciously and write for local newsletters. His family, son Michael, daughters Clare and Rosanne and their children, and his surviving friends remember him as a delightful person: learned, unassuming, humorous and entertaining, enormously wise. It is a privilege to have known him.