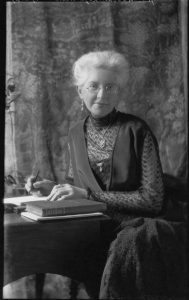 MISS ETHEL CLELIA LEGA-WEEKES, F.R.HIST.S., died at Varnello, her home in Exeter, on 7th April, 1949, after a very short illness, aged 85. Born in London to an American father, Ansel Weekes, master mariner, by an English mother, Clelia Lega, née Fletcher, Miss Lega-Weekes, through her maternal grandparents, was descended from William Fletcher and Antonio Zombelli, the faithful servants of Lord Byron in Italy and Greece. Educated at Aramattapoisett, Mass., she came to England as a student in the art schools. Domestic influences, mainly those of her Italian grandmother, fostered her intense interest in mediaevalism. From genealogical research she gradually turned to the detail of local history. She settled with her mother (who kept her in perpetual tutelage) in Exeter, and made a close study of the civic and ecclesiastical history of the city.

Her best-known work is The Topography of the Close of Exeter. Of the “dry-as-dust” school, she was well acquainted with all relevant mediaeval writings, and was at all times a diligent investigator of minutiae. Perhaps the most valuable of the causes which she furthered was the preservation of the remains of Polsloe Priory. Behind the whole of her work was an elaborate slip-index of references. Herein lay both strength and weakness, since nothing was to be published except what could be proved as fact. In consequence she was often defeated by the deficiencies of the historical record. Much of her own work, then, she rejected as unsatisfactory, though such MSS. probably only needed reconstruction by a young fresh mind. We await a continuation of her valuable work.

One who knew her well describes her as an unconscious Platonist. Her life was Spartan; her mental activity never ceased; nor did the heart with which she fought against adverse circumstances ever flag.

She joined the Association in 1900, became a life member in 1902, and was a member of the Council for forty-five years. Her first contribution to the Transactions was The Old Mansion of North Wyke, 1900, and her last The Earliest-known Landholders of Throwleigh, 1940.