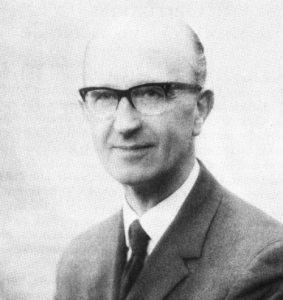 Dr Moore was born in Dublin on 13 December 1912, and took his first degree at University College, Galway where he passed with first-class honours in Mathematics and Mathematical Physics. He then entered the Medical College of the London Hospital, where he qualified in medicine. On the outbreak of war he joined the Emergency Public Health Service, established to monitor possible developments of epidemic disease caused by enemy action.

When war ended, Dr Moore joined the Public Health Laboratory in Exeter where he continued for 32 years, retiring as its Director in 1977. While there, he developed a systematic approach to tracking down the infective sources of typhoid epidemics by the methodical insertion of sampling pads at branching points in town sewage systems. This ‘Moore Swabs’ technique became standard practice throughout the world and it enabled him, for example, to trace to single, unwitting, carriers outbreaks of paratyphoid in Woolacombe, and later in Sidmouth and Chudleigh.

Another of Dr Moore’s innovations was the appointment in a hospital of a nursing officer charged with the specific duty of controlling and minimizing cross-infections. That practice, also, became adopted internationally, and his personal contribution was acknowledged, particularly in the USA. His understanding of, and his concern for, pollution of the sea and of drinking water led in 1977 to his appointment as Chairman of a government advisory committee on the medical aspects of water quality. His advice on that subject was widely sought, and he was consulted also by international bodies, among them the European community, the World Health Organization and the Pan-American Health Organization.

In those and other ways Dr Moore won a well-deserved national and international reputation in bacteriology, epidemiology and environmental medicine. He was for ten years the Hon. Secretary of The Pathological Society of Great Britain and Ireland, and was honoured by election as an Honorary Member of that society. He continued to take an interest in his profession after his retirement, and in 1986 was appointed as an Honorary Research Fellow in the Department of Mathematical Statistics and Operational Research at Exeter University.

Brendan Moore joined the Devonshire Association in 1975, and came to the notice of ordinary members in 1980 as the Hon. Local Secretary of the Annual Meeting held in Exmouth – with its symposium on the Exe Estuary. In 1980, also, he was elected to Council. He was a valued member of the Geological Section becoming its Vice Chairman in 1984 and Chairman in 1986, and he remained on its committee. Installed as President in 1987, at the Annual Meeting in Exeter which celebrated the Association’s first 125 years, he was able to combine two principal interests in his Presidential Address entitled On Intestinal Fever – 125 years on. Elected Chairman of Council in 1989, he continued to serve in that office until his sadly-unexpected death on 1 July, 1990.

Brendan Moore’s leisure interests ranged from woodcarving to playing the violin with his grandsons. He was an active golfer, and greatly enjoyed walking, for that allowed him to join his interests in birdwatching and geology to his love of fine scenery.

He was a man of concerned enthusiasm and keen intellectual curiosity, a friendly man of unfailingly good manners and kindly humour which flowed naturally from his deeply-held Christian beliefs. His life was one of service – to public health, since 1986 as the first chairman of the Exmouth and Lympstone Hospicare; to the Devonshire Association, and to the conservation of the natural environment. A true scholar and gentleman he will be greatly missed by his family and by his many friends.