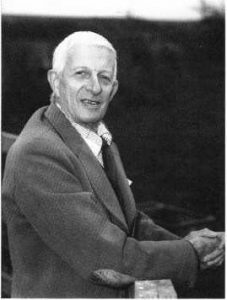 Sir John Quicke was the sixteenth generation of his family on an estate in Devon and, as well as being an innovative farmer, he was a key figure in British rural politics at a time of great change. From after the Second World War until the 1980s, farming and rural Britain had been about feeding the nation, regardless of the consequences. During the 1970s and 1980, some of the consequences became clear to campaigners, who attacked farming with evangelical fervour, arousing denial amongst farming interests. John Quicke, with his clarity and intellectual authority, was able to see both sides and, within the Country Landowners’ Association (CLA), and the group he later chaired, ‘Responsible Use of Resources in Agriculture and on the Land’ (RURAL), he was able to build bridges between farmers and environmentalists. The legacy of his work is that most British farmers and landowners today combine productive farming and care for the countryside in a way that is the envy of the world.

On his own estate, John Quicke combined respect for tradition, innovation and excellence to create an inspiring farming business. He founded Quickes Traditional Cheese, one of the first flowerings of the renaissance in British cheese. At a time when British farming was happy to produce commodities, he was clear that he needed to produce the things that people actually wanted to buy. The farm hosted many groups of farmers and landowners. British farmers came to know that they fulfil many functions and could see, on John Quicke’s estate, how multiple objectives could be achieved. In 1987, the Royal Agricultural Society of England awarded the Bledisloe Medal for Landowning to John Quicke for this combination of long-term estate management and innovative and diversified farming.

John was born in 1922 and brought up on the estate in Newton St Cyres, Devon, to one of the few families of Saxon origin who had retained their land since before the Norman Conquest. They had come to Newton St Cyres after marrying an heiress from the Reformation land re-distribution of the 1540s (although a record, in Latin, held in Exeter University, refers to a Reverend Quicke being given the land at Newton St Cyres in 1216 by the Bishop). As a young boy, John heard a cobbler in his 70s in the village who recalled leading the horses who were sowing acorns to convert farmland to woodland in the Agricultural Depression on the 1880s, ‘a huge change in land use without subsidy’. He remembered his father, in 1929, being told that his milk would not be required that day, and having to pour it away. He took from the story told by the cobbler that things change dramatically and, from his father’s experience, that it was his responsibility to weather any storm.

John Quicke attended Eton College, and was able to wear his Eton tails into old age. He then went to New College Oxford (as Founder’s Kin) studying Chemistry, until he joined the Royal Artillery in 1943. Seeing action in Burma, he left as a captain. He came across yoga in India, starting a life-long interest in the whole range of human experience. Returning to Oxford after the War, he studied Agriculture under Mike Soper. In 1947, he came back to the farm and set about re-invigorating the estate, which had become run down in the long, lean years since the Agricultural Depression. In 1953, he married Prue Berthon (daughter of Rear Admiral Peter Berthon), who was then studying stained glass at the Royal College of Art. She brought creativity and an artist’s training to their partnership, as well as a willingness to embark on new ventures. John Quicke created one of the first large dairy herds, of 300 cows, and took up what was, then, the developing understanding of superior genetics, to breed an admired herd. His innovatory approaches pre-dated the current interest in grazing by 50 years – building cow tracks for the cows to access all areas of grassland easily.

Later, John formed a pig-breeding company, Peninsula Pigs, to sell pig-breeding stock into outdoor pig systems. The focus on high welfare and great flavour was picked up by Marks and Spencer. It was one of the first integrated production systems, specifying breeding, feeding, welfare and handling of pigs: M&S set their suppliers the task of producing the best pork in the world, which standards John Quicke’s company readily achieved.

John and Prue built the cheese dairy in 1973, when he was on his way to being President (1977–79) of the CLA. It therefore fell to Prue to run the operation while rearing their six children. The estate’s woodlands were replanted to Prue’s design in the 1960s and 1970s, which ensured that the planting added to the overall scene in a patchwork that complemented the landscape, and included the retention of much ancient oak-coppice woodland, home to some of the highest concentrations of John’s beloved wild service trees. He was proud that the estate employed as many people as it did in his father’s day.

John Quicke was one of the CLA’s most distinguished presidents. Under his guidance, he ensured that the Association worked effectively with the National Farmers Union, enabling a joint approach to be taken to key issues. He was working at a time when there was hostility towards landowning; but one of his great achievements was to establish the CLA as a trusted source of information and ideas for the Labour Government of the day despite the latter’s desire to ‘squeeze the rich ’til the pips squeak’. John was a Countryside Commissioner, and he was awarded a CBE. His keen interest in the countryside made him a most enjoyable companion on a train or car journey, with his knowledge of farming methods, the relics of agricultural history visible in the landscape, and his wider knowledge of history, engineering, the great buildings of Britain and their occupants, all of which he shared with a light and engaging touch.

John Quicke realised that farming must operate as part of the environment at a time when the two were ‘at war’ in the eyes of many people. He became chairman of RURAL and he brought governmental and commercial, agricultural and environmental interests together, under Chatham House rules, to enable the consensus to be hammered out to produce food, environment, landscape and wildlife from the same countryside. He was awarded a knighthood for his services to agriculture.

Sir John presented his vision of a sustainable and multi-functional agriculture to the Devonshire Association in his presidential address in 1992. By then, however, he had been retired from active farming for five years and had handed over of the management of the business to his daughter, Mary; nevertheless, he was consulted regularly about the farming business until he died. In handing the estate to his eldest son, Dr John Quicke, he made sure that, by gaining the agreement of his other children, and creating a partnership to bring them into the management of the business, they did not feel sidelined. The family continues to work as a team, perpetuating Sir John’s skill in handling this challenging part of a family business.

As one of Devon’s early Malibu board surfers, starting surfing in 1963, John would take his large family surfing together on north Devon beaches, particularly Putsborough, then almost empty of other surfers. He had loved his family holidays in Woolacombe when he was a child and the whole household decamped to an hotel; those memories and experiences were passed on and instilled into his own children a similar love of such holidays. He adored the excitement and satisfaction of a well-caught wave, which he would catch much farther out to sea than others on his longer, bright-red Malibu board. He surfed into his sixties, then gave it up, saying that if he wanted to be accorded ‘the respect given to an old man’, he ought ‘to start behaving as one’.

In retirement, Sir John worked with Prue to create one of the most beautiful gardens in England across two steep Devon valleys, which is open every Sunday afternoon under the National Gardens Scheme, attracting over 1,500 visitors a year. Both keen plantsmen, they created National Collections of magnolias, Knaphill azaleas and berberis. Prue used her keen artist’s eye to create an astonishing symphony of colour, form and texture. Sir John willingly accepted her rigorous decisions to move or dispose of plants that did not fit with the artistic vision, referring to her ‘paramount wishes’, and would bring in a digger, if necessary, to move a flourishing plant. He was awarded the Loder Rhododendron Cup of the Royal Horticultural Society for his outstanding work in preserving Knaphill azaleas for future generations of gardeners. He was working in the garden until his death on 16 November 2009. Sir John died suddenly and with no suffering minutes after inspecting his berberis collection.

Right up to the end of his life, John Quicke could see to the heart of complex questions, crystallize the important points and, with calm and deliberate steps, create a new approach that would elucidate apparently impossible conundrums. He was always committed to seeing how he could make a difference and have solutions that worked for everyone. He retained an intellectual curiosity that enabled him to bring in ideas from all fields; the day he died, he received delivery of books on quantum physics, geopolitics… and the latest Dan Brown. He was a passionate Wagnerian, attending many ‘Ring Cycles’ in London and Bayreuth, and he loved Radio 3. He had also enjoyed a rich spiritual life, ranging from the Anglican Church, Gurdjieff, leading seminars for Erhard Seminar Training, to meditation from several traditions, enabling him to view death with equanimity. He leaves Prue, six children and ten grandchildren.