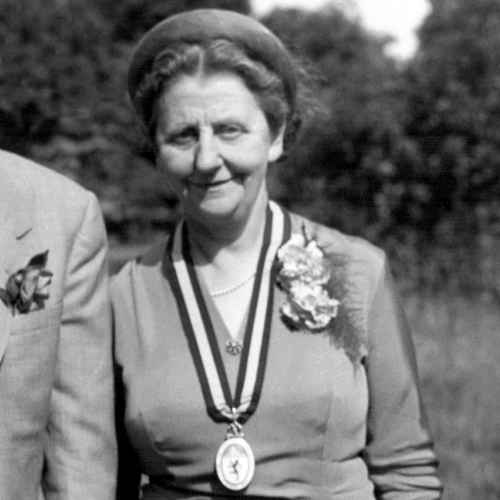 Ursula Radford
when DA President in 1955

Miss Ursula M. Radford died suddenly at her home in Topsham on 26 October, 1976. Thus was ended a personal involvement with the Devonshire Association of almost exactly 50 years, for she first became a member in 1927 and from that time devoted much attention and effort to its affairs, including a long period of service on the Council, the Church Records Committee and the Finance and General Purposes Committee, and representation of the Association on the Committee of the Devon Archaeological Exploration Society. She was elected President of the Association in 1955.

This bare account, however, gives little impression of the larger picture of the importance to the Association of a whole family, deeply rooted in Devon for generations, whose tradition of scholarship and service was splendidly maintained by Miss Radford herself. Her grandfather Daniel Radford, of Lydford and Tavistock, had been a life member; her mother, Emma Louise, Lady Radford, was an enduring pillar of support amid a multitude of her activities in public service, and was herself President in 1927 [sic]; her sister Cicely [sic], a member from 1920, was equally active in its life, particularly in archaeological matters and as Recorder for Ancient Monuments. Indeed, to glance back through the record of the Council and committees of the Association over more than 30 years is to find constant recurrence of the names of the Misses Cicely and Ursula Radford, their uncle A. L. Radford and their cousin Dr C. A. Ralegh Radford. Their joint contribution to the life of the Devonshire Association has been of immeasurable value.

But it is the charm, erudition and quiet wit of Ursula Radford herself which we shall chiefly remember, whose breadth of interests and depth of learning was always placed unstintingly at the service of others, either in conversation or in notes in her beautiful script. The pleasant and interesting papers she contributed occasionally to the Transactions by no means fully reflect her range of learning, though her Presidential Address on ‘The Deans of Exeter’ does certainly illustrate her deep interest in the Cathedral, displayed with a light touch and breadth of mind. Her most valuable scholarly work was her account of the medieval wax images found in the Cathedral after the air raid of 1942, which was published in the Antiquaries Journal, and she was elected Fellow of the Society of Antiquaries (again following her mother’s example) in 1948. She always worked very hard for the endless list of causes and interests in which she was involved—her close concern for the Council of the Friends of the Cathedral throughout her life, the vast amount of work she put in for the Council for the Care of Churches, particularly through the wartime years, and latterly on the Diocesan Advisory Committee, serve as examples rather than a comprehensive account of her activities. We have lost in her passing a truly cultivated and gifted lady whose help was generously given to all who asked it of her.