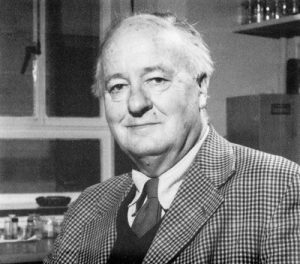 James Eric Smith was born in Hull, the son of a wholesale grocer, and was educated at Hull Grammar School. He was a keen sportsman, being good at soccer, cricket captain at school and an accomplished tennis player. On leaving school he was expected to follow his father in the family business. However, a short spell as a commercial traveller for tea was a complete failure and he entered King’s College London. After graduating with a first in honours zoology he applied for, and obtained, in 1930, the post of Student Probationer at the Plymouth Laboratory of the Marine Biological Association. Thus began a long and distinguished career in marine biology.

Whilst working at Plymouth Eric met Thelma Cornish, who came from a well-known local family, and they were married in 1934. In 1932 Eric took a junior lectureship at Manchester, moved to Sheffield in 1935 and to Cambridge in 1938. He was appointed Professor of Zoology at Queen Mary College, London in 1950 and presided over a period of considerable expansion in the department. During his period at Queen Mary College, Eric and Thelma continued to live in their house at Cambridge and Eric commuted to London. Eric was elected to the Royal Society in 1958 and became Vice-Principal of Queen Mary College in 1963. In 1963 he was also appointed a Trustee of the British Museum (Natural History) and was Chairman of the Trustees 1969-74.

On being appointed Secretary of the Marine Biological Association and Director of the Plymouth Laboratory, Eric left London and returned to the Laboratory where he had started his research career. When the Torrey Canyon ran aground off Land’s End in 1967 Eric persuaded all the scientific staff at the Plymouth Laboratory to put aside their current research and join in the investigation of this first major oil pollution of the British shores. This was probably the only time in the history of the MBA when all the scientific staff were involved in a single project. The resulting book became a landmark in the early studies on the effects and treatments of oil pollution in a marine environment. Eric and Thelma spent six months in Australia in 1970 whilst Eric was serving on the Royal Commission on Petroleum Drilling on the Great Barrier Reef. Because of his kindly but firm nature and his unruffled manner, Eric was in great demand on committees, often to act as chairman, and he spent a lot of time commuting between Plymouth and London. It was under his Directorship that the Plymouth Laboratory underwent a period of considerable expansion.

When he retired as Director in 1974 he continued research in marine biology but gradually became more and more interested in the lives and work of the early Westcountry naturalists. He was knighted in 1977. In 1980 he was our President at Exmouth and his Presidential Address reflects his interest in the early naturalists. During the meeting at Exmouth he played an active part in the Special Symposium on the Exe Estuary and wrote the introduction to the resulting Special Publication Essays on the Exe Estuary. In retirement Eric and Thelma continued to live in their house at Saltash and friends and scientific colleagues who called on them could always expect a tour of the delightful garden they tended with such care.

Sir Eric was a most courteous and kindly man who took a keen interest in all around him and had a special affinity with young people, whether it was students at the laboratory or the children of members of the staff. Many scientists are grateful for his guidance and help in shaping their career.