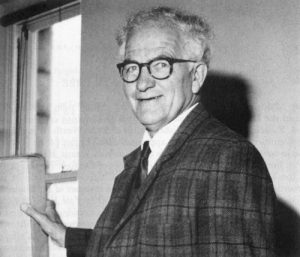 Guy Malcolm Spooner died peacefully on 4 June 1989 aged 81. He joined the Devonshire Association in 1948 and in 1953 co-edited with F. S. Russell some of the published works of R. S. Worth to produce a book entitled Dartmoor. He was appointed Hon. Editor of the Association in 1967, with the author of this article as his assistant. He resigned in 1973. For many years he served as a member of Council. He was active in the Entomological Section, serving as Chairman and one of the Recorders for a number of years. As an active member of the Botanical Section he took part in the recording for the Atlas of the Devon Flora. In 1979 he was President of the Association and his Presidential Address in volume 111 of the Transactions gives a good indication of his wide knowledge of the natural history of the County. In 1988 he was elected to Honorary Membership of the Association. Malcolm, as he was known to everyone, was born at Yelverton in 1907 and was educated at Charterhouse and Christ’s College Cambridge where he graduated with a first in zoology in 1929. He had attended Easter Classes at the Plymouth Laboratory of the Marine Biological Association on several occasions before his graduation and it was to this Laboratory that he came to work as a Student Probationer in October 1929. In 1931 he was appointed to the staff and did early work on the genetics of gammarids. He was an able mathematician and during the Second World War was recruited to the team set up to break the German codes. For this work he was awarded the MBE. In 1943 he married Molly Mare and they enjoyed a long and devoted partnership. After the war Malcolm returned to research at Plymouth and carried out pioneering studies on the uptake of radio-active fission products by seaweeds and marine animals. He was also very involved in the running of the Easter Classes at Plymouth and for many years edited the Journal of the Marine Biological Association. He retired in 1972 only to become more involved in his other interests.

As early as 1919 he had published his first paper on pine hawk-moths. He was an expert on solitary bees and wasps, served as Chairman of the Committee for the Conservation of the Large Blue Butterfly, was a leading authority on the British Hymenoptera and a Fellow of the Royal Entomological Society.

For 15 years he served on the Dartmoor National Park Committee. He was a founder member of the Devon Wildlife Trust and served on its Council.

Malcolm was a naturalist in the finest sense of the word. A walk with him was always a delight as, no matter what the environment, he knew the animals and many of the plants. He was continually spotting things of interest and was ever ready to impart his knowledge to others. Malcolm was no mean artist and was able to produce detailed and accurate illustrations of his scientific findings. Sitting next to him at a meeting always enlivened the proceedings as his pencil was never still; he was either drawing caricature-like cartoons of the people around him or else he was constructing the most complicated word puzzles. At the same time he was carefully listening to what was being said and could produce the most succinct resumé at the end.

Those of us who knew Malcolm have a lot to be thankful for, he taught us much and showed us how to appreciate the full range of Nature. We will miss his advice, his guidance, his wit and his humour.