Dr Bob Hodgson, Botany Section and BSBI recorder, and joint author of the DA’s monumental A New Flora of Devon (2016) spoke about “The Limestone Flora of Plymouth”. For context, reference was made to the mild maritime climate of the area, its wide range of habitats and variety of vascular plants. Present day data (total and native species numbers) were compared with those gleaned from Archer Briggs’ Flora of Plymouth (1880). 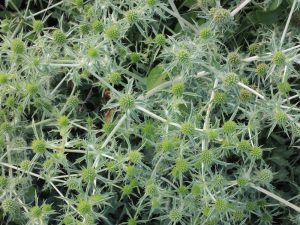 Regarding plants of calcareous soils, the very rare Field Eryngo was found at Devil’s Point by naturalist John Ray in 1662. Other locations mentioned for good limestone and coastal botany were Mount Wise (Lady’s Bedstraw, Sanfoin, Salad Burnet, Quaking Grass, Wild Clary), The Hoe (Ivy Broomrape, Plymouth Thistle, Slender Thistle, Bladder Campion, Sea Plantain, Sea Spleenwort, Brookweed), Mount Batten (Bee Orchid, Greater Knapweed, Common Centaury, Hemp Agrimony), and Billacombe (Bee Orchid, Pyramidal Orchid, Greater Knapweed). Among interesting species noted for reasons other than any limestone association was Early Meadow Grass (Plymouth Hoe) which until about 20 years ago was common on the Isles of Scilly and the Lizard, but has since extended its range with climate change. The nationally scarce Bastard Balm, with nettle-like leaves and large purple-blotched white flowers, is found in a few places in the Plymouth area. It occurs as a woodland plant at a number of Devon sites, but many of the big populations are recorded on grass verges where the annual cut may suit it. 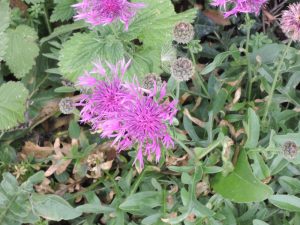 The very rare Plymouth Pear, probably native and known to the area since 1870, occurs at Estover and the hospital grounds. Present also at a few sites near Truro, its main distribution is the European mainland (e.g. western France and Portugal). The late Dr Alison Wilson, botanist, conservationist and Plymouth Branch Committee Member, was instrumental in saving the Plymouth Pear from possible extinction when its Estover habitat was threatened by development. Bob paid tribute to Phil Pullen and Tim Purches for their recording in the Plymouth area including about a dozen species since publication of A New Flora of Devon.

Our second talk, entitled “Plastics in the Ocean” was given by Professor Richard Thompson, OBE, FRS (Director of the Marine Institute, University of Plymouth) whose special interest is the effect of plastic litter in the marine environment. Of the basic size categories of plastic debris (mega-, macro-, micro- and nano-) it is the ubiquitous particles of the two latter groups that are most problematic. Thinking about microbeads from shower gel and micro-fibres from clothing leads to questions about the effects of micro-plastic ingestion on human health and should we wait until there is sufficient evidence of harm before taking robust action. If there is enough evidence for action, possible solutions are not about banning plastics from our lives, but dealing more responsibly with used plastics and in this regard it is very concerning that 40% of plastic production today is single use and 50% of what we pick up from shore lines is single-use items.

Solutions include reducing, re-using and recycling old material as feed stock to manufacture new plastic; the attitude should be to design products with end of life in mind with appropriate standards and labelling. Here we were reminded that a single cosmetic container could contain three million particles or a single wash of clothing can result in 800,000 plastic micro-fibres being released into waste water. Among obstacles to progress mentioned in Richard’s thought provoking lecture were: an approach not sufficiently interdisciplinary (i.e. too much working in a silo), denial, deflection and delay tactics, defamation games and unpreparedness.