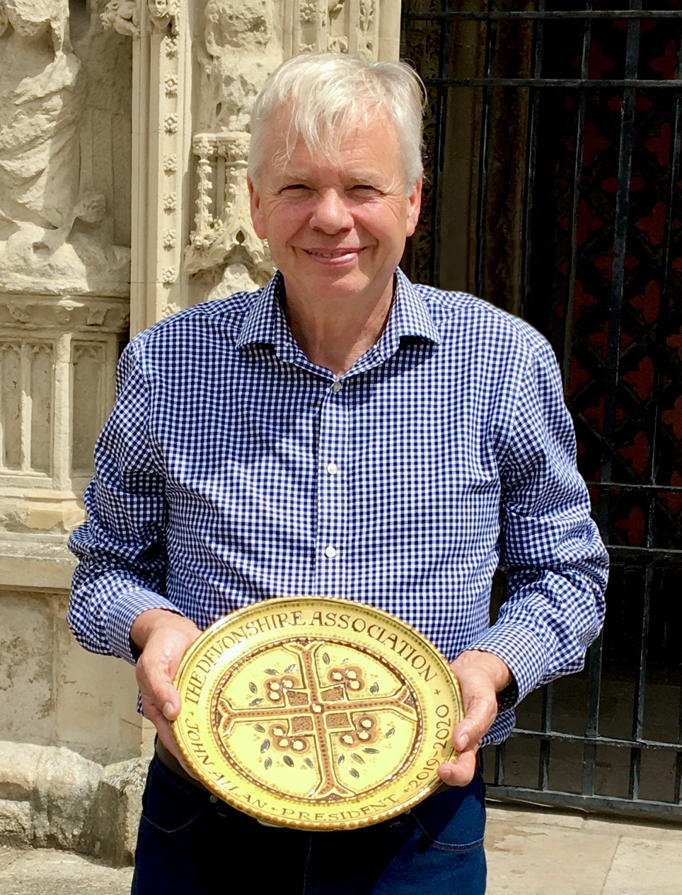 John Allan with his presentation plate

On Thursday 4 June 2020, Sue Andrew, DA Chair, and Ian Varndell, Hon. Secretary, met with John Allan outside a deserted Exeter Cathedral to present him with a token of The Devonshire Association’s gratitude for the energy, support, and infectious enthusiasm he has shown throughout his presidential year.

The gift took the form of a specially commissioned plate, made at Bideford Pottery by Nick Juniper, and decorated by Nick’s father, the renowned potter Harry Juniper. The plate features a design based upon the reverse of a late tenth- or early eleventh-century penny minted at Lydford in west Devon, and thus reflects John’s special interests in north Devon pottery, and Lydford Mint, about which he published a paper in the Transactions of The Devonshire Association, vol. 134 (2002).

Usually we would thank our retiring President at our Annual Conference in June, but, with current restrictions imposed by the government to combat Covid 19, our conference had to be cancelled and the presentation was suitably socially distanced. We have, however, invited John to join us next year in Bideford so that we can express our appreciation to him more fully. 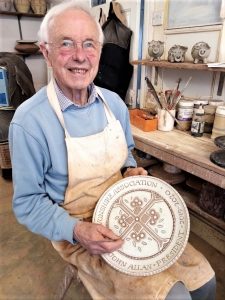 John’s contribution to The Devonshire Association stretches back many years, and he has been a most worthy and distinguished President. From his fascinating lecture on “Polynesian Artefacts in Georgian Devon” delivered in Launceston last June, to his outstanding Presidential Symposium on Exeter Cathedral, held in Tiverton in October, John has made an indelible mark. He has attended Executive Committee meetings, given informative and inspiring lectures for Branches, and acted as leader on visits by DA Sections. For those of us privileged to walk with him around Okehampton and Lydford Castles last September, his erudition and ease of manner made the experience unforgettable.

Despite his many commitments as Consultant Archaeologist to the Dean and Chapter of Exeter Cathedral, and as Archaeological Adviser to Glastonbury Abbey, John hopes to retain his strong links with The Devonshire Association and we very much look forward to his continued engagement with us.