The subject of our 2019 symposium was Exeter Cathedral.

Held at Petroc College, Tiverton on Saturday 5 October, it was hosted by our 2019–20 President John Allan.

Nowadays, after many generations of study, the international importance of Exeter Cathedral is widely appreciated, but it might be thought that such a richly documented and intensively-studied building has received so much attention that there is little fresh to say about it. In fact the opposite is the case: a remarkable range of scholars in Britain and abroad continue to make exciting progress in understanding this familiar structure.

The symposium will present five papers illustrating a range of current work on historical aspects of the building, its artistic connections, monuments, patrons and music. The cathedral is also, of course, a living community and in the afternoon session we will look at aspects of its modern life, focussing on its traditional masoncraft and the care of its outstanding library and archive.

Many thanks to John Allan for organising such an enjoyable day which was justifiably fully booked.

Report from Dr Sue Andrew, Chair of the DA.

On Saturday 5 October, 135 people assembled at Petroc College, Tiverton, for an eagerly anticipated Presidential Symposium. Our President, John Allan, whose stimulating address at the DA Conference in June had taken us to Polynesia, elected this time to focus on that great church for which he has been Consultant Archaeologist since 1990: Exeter Cathedral.

The cathedral has long been a subject of fascination for members of The Devonshire Association and no fewer than 21 papers have been published in Transactions on various aspects of its architecture and history since 1876. Yet, while the cathedral has been intensively studied, and is widely recognized as being of international importance, our knowledge of this iconic building continues to develop as scientific techniques improve and scholars adopt new approaches. 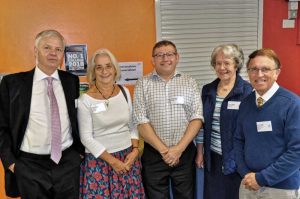 The morning session of the Symposium began with a talk on Bishop John Grandisson (r. 1327–1369) by Brian and Moira Gittos, from the Centre for Medieval Studies, University of York. Our speakers discussed the Grandisson family, including their tomb monuments at the church of Ottery St Mary, which was extensively rebuilt by Bishop John in the mid-fourteenth century. The similarities in carving of figures from the west front of the cathedral to that on monuments was also explored, as were treasures associated with the bishop: his psalter, an ivory triptych, and his chapel located within the west front of the cathedral (although the bishop is no longer buried there – his bones being scattered at the Reformation).

David Davies, freelance classical musician and organist at the University of Exeter, discussed Interregnum to Restoration: Music at Exeter Cathedral focusing on the life of Matthew Locke, a leading composer of the seventeenth century, who was born in Exeter, c.1622. Locke was a chorister at the cathedral and his name, with the date 1638, is scratched into stonework, now hidden behind the organ. Locke later became a composer and went to London. Not long after the monarchy was restored, in 1661, Locke was appointed composer in ordinary to Charles II, writing music for his coronation and anthems for the Chapel Royal. David himself played some of Locke’s music to an appreciative audience. 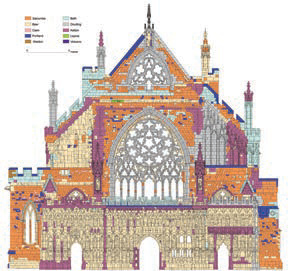 Diane Walker, independent scholar, leader of the cathedral’s guide training programme, and author of a forthcoming guide to the cathedral, spoke on Episcopal Enigmas, especially the movement of monuments: how ledger stones and monuments had been re-positioned throughout the life of the building and, consequently, how difficult it is to know quite who is buried in the cathedral and where. Diane also talked about the Bishop’s Throne and canopy, and noted that recent studies, prompted by concerns for its stability, and enabled by scaffolding, have brought to light much new evidence.

John Allan presented us with an assessment of the changing face of Archaeology and the Study of Exeter Cathedral, and how developments in understanding the building impact upon its conservation. John looked particularly at the stones, and stained glass, and stressed the importance of appreciating the different periods of accretion and repair. He emphasized that the cathedral, and its documents, remain a great source for discovery, with new work being published frequently, not least in the newsletter and Annual Report of the Friends of Exeter Cathedral. 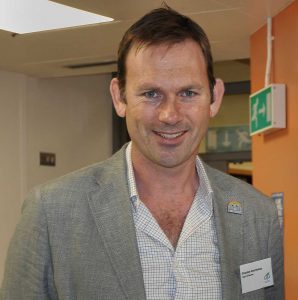 After an excellent lunch, and much conversation, Charlie Courtenay, Earl of Devon, spoke on The Courtenays and Exeter Cathedral, noting his enduring family connections with the cathedral, while the Courtenays fell in and out of favour with the kings of England. He commented on how moving he found it when this connection was made manifest with the tolling of a great bell at the death of his father. 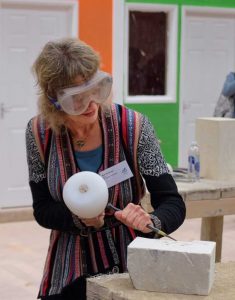 The day’s lectures were followed by demonstrations of modern masoncraft by a team of three of the cathedral’s masons. This gave us all the opportunity to try our hand at sculpting stone and revealed, in practical terms, how measured and delicate is the process of conservation and repair.

Ellie Jones, cathedral archivist, also discussed the care and use of the cathedral’s ancient manuscripts – Exeter being possessed of many fine documents including the Exeter Book, one of only four extant codices of Anglo-Saxon poetry.

The Devonshire Association is deeply grateful to the speakers, cathedral masons and archivist, and especially to our President, John Allan, for a truly inspiring and illuminating day about this most beautiful of buildings.

For reference, a copy of the event’s flyer can be downloaded here.

Further photos related to the event

You can click on the photos to see larger versions. 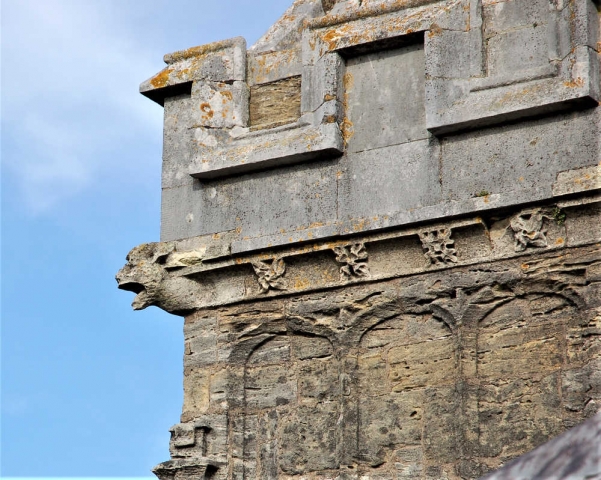 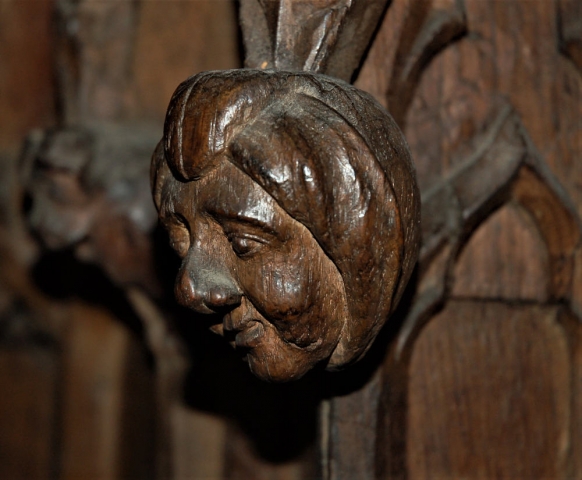 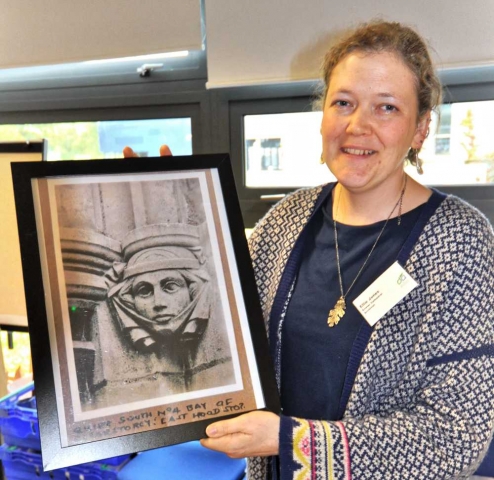 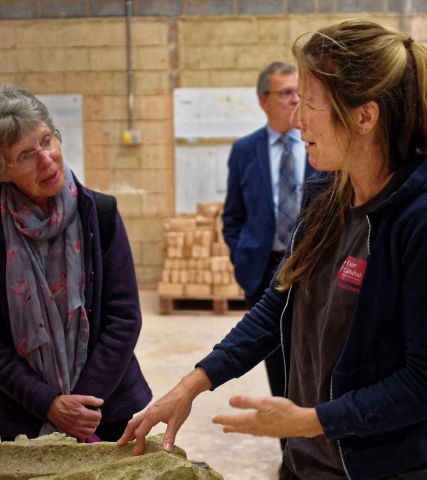 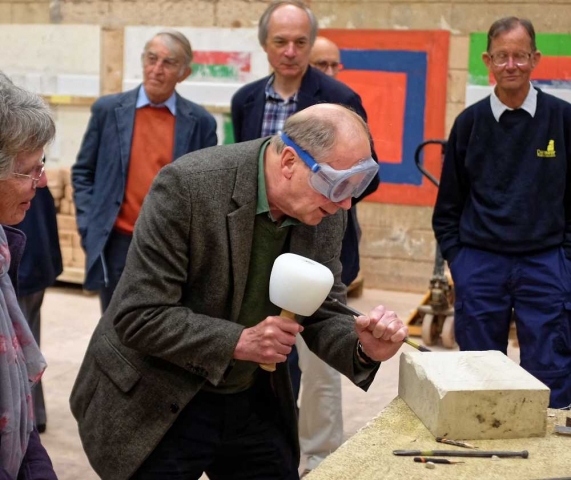 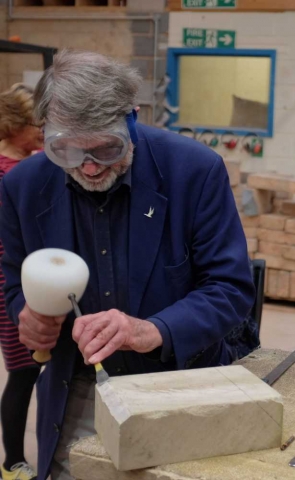 Conditions for reuse can be found on the Reusing images page.