Report and Transactions 2017 – an overview 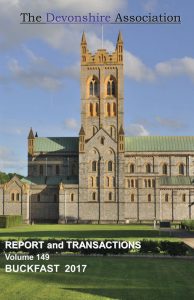 Volume 149 (2017) of the Devonshire Association’s annual Report and Transactions was published before the end of the year – the first time for many years that this target has been achieved. Thanks are due to its editor, Professor Malcolm Hart, for expediting this: he assures us that this is the plan for future years too.

For those unfamiliar with our major annual publication, here’s an overview of this volume.

After preliminary material that includes the reports of the Executive Committee, the Association’s finances, and the annual conference held at Buckfast Abbey, the first 232 pages of this volume are devoted to eleven papers covering a wide range of topics. These are headed by the Presidential Address given by David Fursdon, Lord Lieutenant of Devon. All the papers are related to Devon and an abstract for each is available here. Appropriate to the year in which we held a major celebration of nearly 500 years of contact and interaction between Devon and Newfoundland, three of the papers are related to that Canadian Province.

These reports relate to the previous year (2016) and are a mixture of narratives about the talks, lectures, field trips, and excursions that were enjoyed by the Section members, and reports on the research they have undertaken. The Botany and Entomology Sections continue their long series of annual recorders’ reports (109th report on Botany, and 69th on Entomology). As a collection, these form an invaluable record of changes in species found in the county, year-by-year. 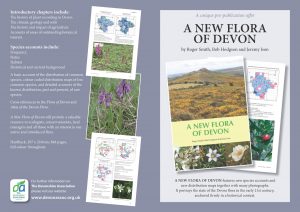 Leaflet advertising A New Flora of Devon, our own publication

As usual, the volume ends with book reviews. This year we have reviews of eight recently-published books related to Devon:

Finally, tucked away on page 412 below the details of the various subscriptions we offer is the news that copies of the current Report and Transactions can be purchased by non-members for £30. Contact the Registrar if you would like to buy a copy. We also have a small stock of back copies for the last twenty years that are available for purchase.