Our winter season of talks continued in February with Dr Sue Andrew’s fascinating talk about the church houses of Devon. She told us that most of them had been built in the 90 year period from 1450 during an upsurge of piety and church rebuilding, which was funded by wool and tin and driven by a fear of purgatory. It was no longer proper to conduct business in the nave of the church so a church house was built nearby as a place for the secular business of the parish to be enacted. Most had common features, notably an external double stairway to the first floor hall, to avoid the kitchens and storerooms on the ground floor. Until the end of the 16th century, church-ales held at the church house were the main fundraisers for the parish church and everyone in the parish contributed and took part in the revels. Their final demise was caused by the rise of the Puritan ethos. New uses were found for many of the buildings, typically as school rooms or almshouses, and a number of them are still used by their local community today.

In March our then-President, Dr Todd Gray, gave an illustrated talk to a packed venue about the Royal Clarence Hotel and the fire which destroyed it last October. He began by revealing how he became involved: being asked by a BBC reporter for some background on the hotel. Twelve days later he had given over 50 interviews! With the aid of many photos taken while the fire was being fought, he explained how it started in the picture gallery, travelled through the roof space of the adjacent Well House and how quickly it became evident that the hotel was going to be severely damaged. Although the Clarence had medieval foundations it had been heavily restored in the 1860s and little original fabric remained. However, the buildings in High Street behind the hotel are just as old and having been much less altered are highly significant, and he described the part he was able to play in saving them from the fire, with advice rapidly garnered from expert building archaeologists. He then told us about the features known to have survived the fire; about the history of the hotel and other buildings in “St Martin’s Island”; and plans for the future.

It was good to welcome some newcomers and returning familiar faces to our April meeting which was a talk on Devon place-names by Robert Hesketh. As always, his presentation was lively and entertaining, stimulating much discussion and interest. He explained that place-names are closely related to topography and also reflect the early history, the majority being of Celtic and Old English origin with a considerable number of Norman French as the Conqueror’s knights were rewarded with lands. The picture is not always clear, however, and there are many disputed derivations and revelations as studies continue. 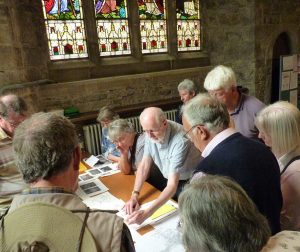 For our first summer excursion Brian Lewis gave us an insight into Ashburton with a instructive walk around the town, revealing what lies behind the facades of shops and houses and what they have witnessed through history. Starting at the church, he explained the development of the building and the many unexpected finds discovered during recent work to replace the floor. A walk through West and East streets via the centre ‘Bullring’ revealed merchants houses from the 16th to 18th centuries, the site of the original market hall, and numerous pubs. Many had medieval features, now hidden behind newer facades and one even had graffiti from prisoners of the Napoleonic wars. A town with such a wealth of interest and a guide with such detailed knowledge made this a most enjoyable afternoon from which we came away realising that there was far more to see, maybe on another occasion.

Our second excursion was conducted on the Dawlish sea wall between Coryton’s Cove and the section that was rebuilt after the horrendous storm damage of February 2014. 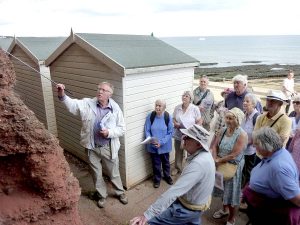 Professor Tony Buller guided 24 members of the branch in masterly fashion through the 350 million years of geological history and the thousand years of human history which make up the 21st-century Dawlish.

Prior to the arrival of Brunel’s railway in the 1850’s, Dawlish had established itself as a highly regarded watering place for the well-to-do and those needing clean sea air for medicinal purposes. In fact, in 1810 it was considered the very Best in the West. Small farm agriculture/horticulture was well established in the narrow valley of Dawlish Water following the draining of the swamp that characterised many of the low-lying bays of the South Devon coast. Fishing provided a living for 180 fishermen and the Fisherman’s shelter below Lea Mount, the third of such buildings, is a strong reminder of the town’s fishing past.

On the beach at Coryton’s Cove we were fascinated by Tony’s interpretation of the rock outcrops which back the cove. We were introduced to conglomerates, breccias, honeycomb weathering, foresets, cross bedding and the changes in the landscape from 1795 as illustrated by Rev. Swete’s watercolour of the rocks separating the cove from the main Dawlish beach.

Tony is an excellent story-teller: that 24 people set out and 22 were there at the finish, and that the two that left only did so because they had grandparenting duties to fulfil, is testimony to his ability to make technical and scientific material interesting and informative to a wide-ranging group of listeners.

Back to main Branch page.