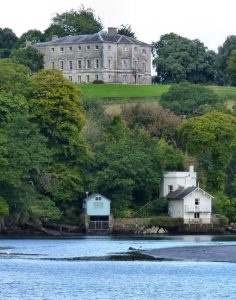 On a fine September morning about ten Branch members assembled at Steamer Quay in Totnes for a boat trip down the Dart estuary. Accompanied by the captain’s eccentric commentary, we noted all the major sites including Sharpham House and vineyard, Duncannon, Stoke Gabriel, Sandridge, Greenway and Dittisham opposite, Philips Boat Yard (soon, we learned, to be redeveloped) and of course, the magnificent view of Dartmouth itself revealed as we ended our outward journey. At Dartmouth, most of us managed to dodge the only shower that dampened the day as we each set about enjoying the visit in our own ways, including lunches taken at a diverse selection of establishments. While sailing both up and down the river, eagle-eyed viewers binoculared and photographed a variety of secretive wildlife, though on the return journey no-one missed the large noisy beast that flew over us several times, apparently taking great interest in the boat: it was a Navy helicopter.

In November Janet Dann gave an illustrated talk about the island of Lundy that has so captured her heart that she has visited it 22 times (so far) and has named it “The Magical Isle”. Five kilometres by one, Lundy is comprised almost entirely of granite and today is owned by the National Trust, but administered by the Landmark Trust. The only public house on the island is known as the Marisco Tavern, named after the “wicked” de Marisco family who owned the island for many centuries. A later lawless owner was Thomas Benson, who in the 18th century kept the convicts there that he had been paid to transport to Australia. Janet recounted many more tales, both historical and personal, and provided a plethora of information about the island. Everyone came away with a heightened appreciation of the place and probably several intentions were made to visit, either for the first time or to renew an acquaintance – despite being reminded of the stomach-churning seas sometimes encountered by the ferry, MS Oldenburg!

For December’s meeting, Tony Burges, an Exeter Redcoat, took us on a lively 90-mile and 185-million-year virtual journey along the Jurassic Coast from Exmouth to Studland Bay in Dorset. Aided by abundant photographic slides, his presentation related all the major sites and stories encountered along the way to the underlying geological sequence that lies exposed all along the coast. Everyone present gained a fresh understanding of the reasons for its designation as a World Heritage Site. 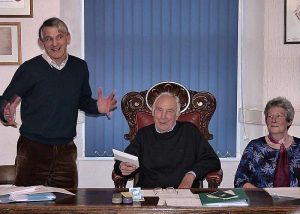 Colin Turner, who has been Branch Chairman since 2004, has finally found someone willing to take over the post. At our AGM in January Jonathan Aylett was unanimously voted to be his replacement. Colin was thanked for his many years of service as chairman and was presented with a small token of appreciation.

Colin still retains his post as Branch Treasurer, but during the last year the committee has said farewell to Ginnie Godwin, Janet Gould and Janet Dann who have all resigned for personal reasons. We thank each of them for their contributions to the work of the Branch. Lee Ann Martin and Annie and John Maltby remain on the committee, and we welcome new member Christine Reader. After the AGM a raffle was held, and then the committee provided a fine tea which included a plate of traditional Devon tuffs.

Looking forward, we still have three interesting talks to look forward to this spring: Derek Gore on the archaeological excavations at Ipplepen; Michael Martyn on Princess Charlotte who died 200 years ago; and John Risdon on Agatha Christie. Our varied programme for the coming season includes visits to the President’s home, Fursdon; Babbacombe and St Marychurch, the oldest parts of Torquay; and three unique churches in the Teign Valley. Our winter lecture programme includes talks about the Black Death on Dartmoor, The Three Hares motif, Austins in Newton Abbot, Devon’s piers and Widecombe’s lost manor house. See the list of upcoming events for full details.