Back to the Future: the Social Landscape of Devon 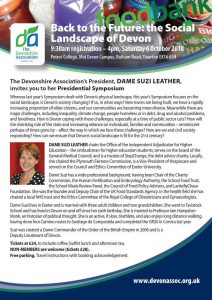 Held at Petroc College, Tiverton on Saturday 6 October, and hosted by our 2018–19 President Dame Suzi Leather. As stated in the leaflet that was prepared for the event:

Is Devon’s society changing? If so, in what ways? New towns are being built, we have a rapidly increasing proportion of older citizens, and our communities are becoming more diverse.

Meanwhile there are major challenges, including inequality, climate change, people homeless or in debt, drug and alcohol problems, and loneliness.

How is Devon coping with these challenges, especially at a time of public sector cuts? How will the shrinking role of the state and increasing reliance on individuals, families and communities – reminiscent perhaps of times gone by – affect the way in which we face these challenges? How are we and civil society responding?

How can we ensure that Devon’s social landscape is fit for the 21st century?

Devon has a relatively stable, ethnically homogenous population, which is predicted to increase by 15% by 2033. A direct result of this will be a very large number of people over 60 years old, with a particularly striking increase in the number of over 85s. With one in three developing health problems, as well as challenges brought about by isolation and a loss of close social networks, one can no longer rely on the authorities alone to provide the necessary support; and this is especially acute in the face of increasing personal debt and public sector financial austerity and cuts. The answer must lie in developing an even stronger civil society, somewhat reminiscent of a bygone age but tailored to the social landscape of the 21st century. 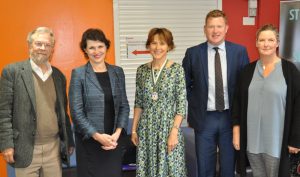 Both the morning and afternoon sessions were brought to a close by Christopher Southgate (Associate Professor of Theology, Exeter University) who recited some of his exquisite, spiritually powerful poetry.

I use the moor today, ashamedly,
as an antidote
to blind family anger.

I start the long slope of Hameldown
(the far ridge like a line
of scripture, forbidding self-love).

Wind against. A white film dusting
the kists. Deer-sprites
seem to haunt the valley-floors.

The sky is empty, wash-blue, as though
some controlled explosion
had cleared away its debris

leaving only light, and three thorn
trees, absolute
as to sharpness. Suffering.

I find rest in hard ascent, my chaos
left printed in the white,
false summits disregarded.

As I stump down off the hill the snow
drifts after me, erasing
my working. I walk away empty –

* Reprinted with permission from Christopher Southgate, Beyond the Bitter Wind, Poems 1982-2000 (Shoestring Press).

Everyone agreed that this was a noteworthy symposium in terms of its richness of content, thematic continuity, and presentation technique.