Historians, their Manuscripts, and the Creation of History. 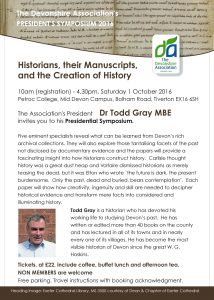 On 1 October, a sell-out audience flocked to Petroc College,Tiverton, for Dr Todd Gray’s Presidential Symposium entitled Historians, their manuscripts and the creation of history. The event reached out well beyond the membership of the Association with almost half the audience not being members.

Following a welcome from our chairman, Peter Beacham, Todd opened proceedings with a talk entitled The collecting of Devon’s manuscripts, 1555—2016. We learned that perceptions can hang on the interpretation of single documents and thus that interrogation of a document can lead to change in our understanding. While it wasn’t surprising to hear that many manuscripts have not survived, it was to learn that what we would perceive as historically important documents were used in past times to wrap fish or to seal jam jars.  Even where valued, and held in institutions, documents were lost for a number of reasons including bombing in the Second World War. Todd also reminded us of the different interpretations that arise, and the restrictions on what we say, imposed by social norms. 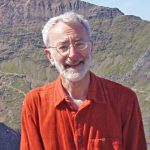 Dr Oliver Padel of the English Place Name Society gave a stimulating address about Devon place names: where could we go from here? He identified three areas for further work in Devon: researching additional medieval forms from documents; finding early spellings of field names and making them available; and doing the same for coastal names. The medieval form is essential as the modern name can be misleading; comparisons with other counties such as Dorset can assist. The Association could encourage such research and publish it. This is an area of study where specialist knowledge is not required to make a start, key tools such as the 1:25,000 map are readily to hand and there is lots still to discover. 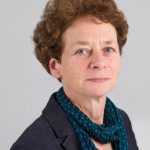 Professor Julia Crick from Kings College London is engaged on a major research project on the Exeter Domesday book. Fighting a viral infection, Julia valiantly delivered her presentation 1086 and all that: the Exeter Domesday Project. Julia and her project team adopt a highly forensic approach to study of the manuscript and she was able to show that multiple scribes of differing backgrounds had worked on the document. A scribe denoted as Exon was the master scribe who also made corrections to the work of others. The project is at an early stage and outputs will be widely available on completion. 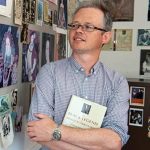 Professor Mark Stoyle of the University of Southampton introduced the audience to the Exeter based Death Metal band, Kill all the Gentlemen, in his talk Kill all the Gentlemen:(mis)representing the Western rebels of 1549. Perhaps showing the perils of Wikipedia, Professor Stoyle argued that seeing the Western rebellion as primarily an act of class war rather than a religious struggle in response to the new prayer book is a mistake, and one picked up by the metal band. This arose from the word ’all’ first appearing in this phrase relating to the rebellion in 1843, almost 300 years after it took place. The leaders of the rebellion were themselves gentlemen and we were told very few, perhaps only half a dozen, gentlemen were killed by the rebels. The phrase ’kill all the gentlemen’ once coined, was later described as a slogan, and then recorded in Wikipedia in relation to the rebellion. Professor Stoyle acknowledged there were class antagonisms, but there was probably no single cause for this act of West Country defiance.

The Symposium then broke for a tasty and filling lunch, prepared by the Petroc catering staff, with plenty to eat for all. As well as an opportunity to share views and meet friends, there were a number of interesting stalls staffed by representatives from the DA History Section, the DA Buildings Section, Devon History Society, Devon Archaeological Society, Friends of Devon Archives, SW Heritage Trust, Devon Archives and Local Studies and the Mint Press. 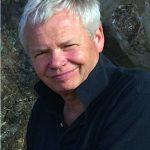 After lunch, John Allan, the local archaeologist known to many, spoke about The houses and household goods of Elizabethan Exeter. Dr Allan talked about the interface between documents and the archaeological record, obtained through digs, buildings, and artefacts. He said that for example Orphans Court Inventories provide a mountain of material. These show that Elizabethan Exeter was receiving goods such as Ming china not widely available in the rest of England. Some china was in Exeter in the 1590s even before it reached Amsterdam, Dr Allan made the point that documents help to provide precise dating for archaeological finds. 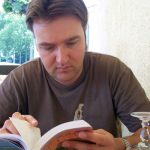 Professor James Daybell from the University of Plymouth spoke about Archives and the question of Gender. He made the point that women can often be hidden in history and that a distorted view can arise from what is in our archives. This can be to some extent countered by seeking out female writing, for example, in the form of letters. As such letters were often not preserved, the historian should look for all relevant sources including family bibles, which, for example, can be annotated with genealogical information, recipe books and other records connected with the family and domestic household.

Todd Gray concluded with a talk entitled Devon’s historians, 1555- 2016. He reviewed the historians who have studied Devon from Hooker to Hoskins. Dr Gray made a plea for documents about Devon to be collected and said it was time to go back to organised research of the county. The Association has an important role to play in this.

Following a panel discussion, delegates rounded off the day with tea and cake.

In conclusion, the author should acknowledge the comment made on the day that ‘history is slippery’. Any account will necessarily bring in bias, selectivity, and differing emphasis.

Photos from the event 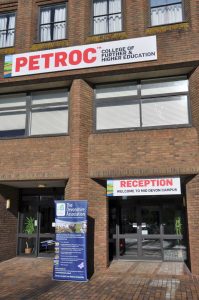 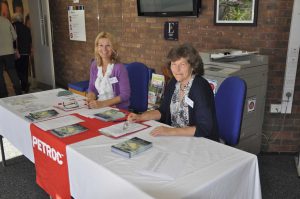 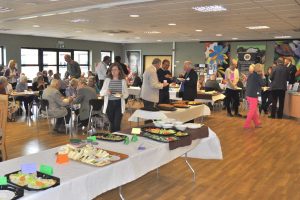 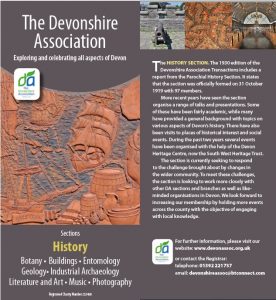 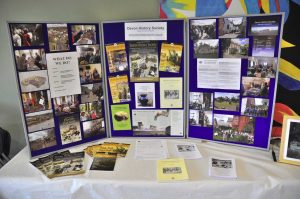