A year ago, many of us had never experienced ‘Zooming’, yet in these extraordinary times it has rapidly become the regular pattern of our Branch programme of events enabling us to keep in contact with each other and to watch talks on a wide variety of subjects. These online evenings, although initially forced upon us, have proved significant in introducing the DA to a wider audience than could realistically ever have been achieved at Branch and Section meetings held under normal circumstances. The number of people logging into the Tavistock talks alone has increased markedly and, thanks to Ian Varndell’s technical support, we have enjoyed an unexpected although welcome influx of new members. Difficult though the season has been, we have received a number of appreciative messages from those who are distanced, for whatever reason, and unable to attend our meetings. We remain nevertheless acutely conscious that not every member has access to digital technology and endeavour to keep those unable to join us in touch by more traditional means.

We finally held our postponed AGM online in September 2020, since when we have enjoyed a programme of virtual talks using the Zoom application, beginning with presentations from two of our own members: Andrew Thompson on “Heritage and how heritage professionals can compare Tavistock with World Heritage sites like the Taj Mahal”, followed by a nostalgic journey back in time with Stuart Windsor covering the life of his great-grandfather, an Exmoor hill farmer, as told through the farm work diaries which he kept from the time he started farming in 1908 until he died in 1957.

In December ’20 a fifth generation clay worker employed by Sibelco, whose association with the world-renowned ball clay industry in the south west stretches back for over 300 years, provided us with a unique insight into the Devon Ball Clay Industry and the Stover Canal, whilst for the first meeting of the New Year a senior oceanographer presented us with a challenging yet comprehensive guide to the history and working of The Met Office.

In February we were privileged to visit the workshop of one of the foremost wheelwrights in the country with a family history dating back to 1331, and in March Bill Horner, Devon County Council Archaeologist, spoke eloquently about the ever-growing body of evidence for the Roman occupation of our countryside. 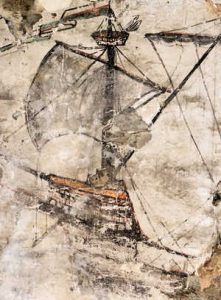 Our meeting in April was a unique opportunity to learn more about a recently discovered treasure from a well-known local speaker. Dr Geri Parlby started researching the background to a detailed wall painting of what appears to be a sixteenth-century Tudor warship in a first floor room of a shop in Market Street, Tavistock in 2018. The section of the painting which still survives is surprisingly detailed, showing the forecastle of the ship decorated with crosses of St George, the foremast and part of the mainmast, all in quite vivid colour. However COVID 19 and a lack of funding mean that much of the history of both the house and the painting are still a matter of conjecture. Why for instance should the painting of a ship exist in a land-locked town? Who owned such a relatively wealthy property? Dr Parlby is to be congratulated on the progress she has already made but is still left with a lot of questions which need resolution.

North Devon featured in the last of the season’s presentations. Adrian Wills, a founder member of the Rolle Canal & Northern Devon Waterways Society, afforded us a fascinating account of the former Rolle Canal which was only in use for a relatively short period of time before being sold to form the new railway from Bideford to Torrington in 1871. Some parts of the canal are still visible today including the Beam Aqueduct, the sea lock and parts of the inclined plane. Returning the waterway to a state in which navigation could again take place is clearly a pipe dream; the costs of full restoration are too expensive to contemplate. However efforts are being made to raise public awareness to its course and to restore where possible the salient features of those parts of the canal which still exist.

The first talk of our new season will be “Ethics in Media Medicine – working on the Blue Planet series and Global Health” to be given by Dr Lucy Obolensky in September 2021. Later we look forward to hearing more about the need to protect our crumbling coastline and about Devon wildlife as seen by a wildlife photographer and ecology consultant.