Our winter season of monthly meetings continued in February with a talk by Ainsley Cocks on The Cornwall and West Devon Mining Landscape: a World Heritage Site on a cultural par with Stonehenge or internationally with the Taj Mahal.

Born and raised in Cornwall and with a background in Cornish mining history and heritage, Ainsley was instrumental in drawing up the original bid for World Heritage status in 2001 and, since inscription in 2006 under the auspices of UNESCO, the United Nations Educational, Scientific and Cultural Organisation, has managed research and information gathering to inform their periodic reporting requirements, conservation project delivery and the many and various enquiries posed by partner local authorities, heritage agencies and the public.

Much of the landscape of Cornwall and West Devon was transformed in the 18th and early 19th centuries as a result of the rapid growth in the production of copper, tin and later arsenic. Its deep underground mines, engine houses, foundries, new towns, port and harbours and their ancillary industries enabled the region to be described by Dr Roger Burt of Exeter University as probably the most important mining district in the world in the mid 19th century. The inscribed site consists of the most historically significant surviving components of this landscape and is made up of ten areas, each with its own story to tell. One of these areas significantly covers the Tamar Valley and Tavistock, a landscape in which at its zenith 117 separate mines were in operation chief among them Devon Great Consols, once the most productive copper mine in the world. 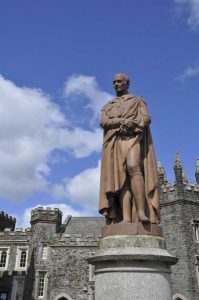 In 1861 23% of Tavistock’s working population were miners or mine-workers. Indeed the dramatic remodelling of much of the medieval town by the 7th Duke of Bedford was achieved with the profits from these mines, whilst a substantial proportion of the mining working force was housed in model cottages still to be seen at Fitzford. In addition remaining examples of the past industrial heritage of the area exist in the form of a mineral transport network – mineral quays at Morwellham, a mine railway and the Tavistock Canal, conceived by John Taylor to link Tavistock with the port of Morwellham, as well as in the remains of three iron foundries in the town.

The site itself is the largest industrial World Heritage Site in the UK extending some 20,000 hectares across Cornwall and West Devon. It does not itself own these assets but works with an impressive range of partners including Cornwall, Devon and West Devon Borough Councils to protect, preserve and enhance them, as well as to increase understanding and to celebrate the cultural importance of our global industrial heritage.

In 2016, an impressive programme of events to celebrate the tenth anniversary of the site included the construction of the Man Engine, drawing over 160,000 attendees and massive world-wide attention. Such indeed has been the world-wide impact of the area’s industrial past that there are currently 175 international sites with known Cornish connections.

Thanks were expressed to Ainsley on behalf of all those present for providing members with such an inspirational evening.

In the early sixteenth century most gardening knowledge had been in the hands of the monks. All this expertise had been lost after the dissolution of the monasteries but the new estates formed in their wake, coupled with the comparative peace of the period, renewed interest in gardening. At the same time, explorers such as John Tradescanth the Elder and his son had begun to bring back exotic plants from abroad, the most prized being the tulip, the bulbs of the plant being offered for sale in 1637 at the height of its popularity for 3,000 florins each, the equivalent of the wages of a skilled worker for ten years. John Parkinson, the Royal Botanist and others were also beginning to produce finely engraved books on gardening, garden design became the province of the architect and Charles II initiated an interest in topiary.

Yet it was not only the rich who valued their gardens. 90% of the population regarded them as a functional necessity. How vital were their gardens to the household economy of our 17th century ancestors ? How did they use the herbs and plants they cultivated to support them in their daily lives ? Which of these plants could be eaten, which used to cure their illnesses when the charges for physicians and apothecaries were beyond their means or which for pest control ? These were some of the questions which Mistress Agnes addressed over the course of a well-researched and informative evening. Many of the plants had multiple uses and almost all were plants with which we are all still familiar and in common use today. Yet how many of us use marigold petals as sweeteners and why do we still plant bay trees outside our doors?

This was another fascinating evening and one much appreciated by all those who were present.

Our AGM took place on Friday, 20th April when the three current officers were re-elected to serve for a further twelve months. Members were pleased to note that the Branch had enjoyed another successful year with encouraging signs of growth in membership and in those attending meetings.

Following the official business, Dr John Morgan, a member of the Association, introducing an illustrated talk on Bronze Age Astronomy on Dartmoor* asserted that, in 1905, Sir Norman Lockyer, the Astronomer Royal, claimed that the northern row at Merrivale would have been aligned with the rising of the Pleiades constellation in 1580 BC. However, by 1420 BC the stars would have changed position so that, to observe their rising, it became necessary to build a second row. Lockyer’s theory was not accepted, possibly because it was based on only a few examples. On Dartmoor there are about 30 rows rising to the north east. The alignment of each row was measured accurately using GPS and every one of them was found to have been aligned with the rising of one of six bright stars of the Pleiades at dates between 2750 and 1600 BC.

If the rows were astronomically aligned, what about the cists ? It has long been established that most cists are oriented with the long axis in the north-west/south-east quadrant. No skeletons have been found in the Dartmoor cists but excavations elsewhere have shown that it was traditional for a skeleton to be laid on its left side with the head at the northernmost end i.e. facing out to the north-east. Many of the cists are too dilapidated for their alignment to be measured but, where this can be done, the results and the distribution of dates are very similar to those for the rows.

The stone circles and some of the standing stones appear to be positioned so that a significant tor or valley is in line with a solstice or equinox. For example, Cox Tor seen from the Langstone Moor circle marks mid-winter sunset.

Following the presentation, Dr Morgan was warmly thanked for a fascinating and informative talk, much appreciated by those who were present.

* Dr Morgan’s paper on this topic: ‘Bronze Age geometry: the layout of the ceremonial site at Merrivale’ was published in the Transactions of the Devonshire Association, Volume 148, 2016, pp. 191–206. See the abstract here.

Sourton Quarry on the outskirts of Bridestowe was the venue for the latest of our summer visits, where a number of members gathered to explore the remains of the former quarry workings and to observe some of the fascinating wildlife which has now taken over the site. Back in the 19th century, the quarry produced high grade limestone but closed due to flooding in 1906. It then came into the hands of various owners until finally in the 1960s English China Clays finished quarrying aggregate and the lease was sold to the Devon Wildlife Trust who now manage it as a nature reserve.

Very little of the original quarry currently remains and what little there is is largely inaccessible. However the ruins of the captain’s house can be clearly distinguished and a number of the lime kilns are in surprisingly good condition. The whole area is surrounded by spoil heaps and the steep sides of the quarry, after such a long while, have largely been taken over so that the site is extensively covered by wildflower-rich open areas, scrub and woodland, inhabited by a variety of plants, birds and bats – kingfishers, grebes, peregrine falcons, owls, dormice, butterflies and eleven species of bat, including both the greater and lesser horseshoes which find roosts in the remaining buildings and tunnels and around the water lake deep in the heart of the quarry. Since many of these are on the list of protected species, there is much to see and to learn although, on any one visit only a select number are visible, dependent on the time of day and/or season of the year. The group was fortunate to include a geologist who was able to add a further dimension to the visit by pointing out some of the many interesting geological features to be found amongst the remains of the former quarry. Among these, we learnt that earlier there had been deposits of coal, although in insufficient quantities to be commercially exploited.

The weather was favourable, sunny and warm and, although at times the terrain was demanding, within the reserve walking was at an easy pace and the afternoon full of interest. Thanks were expressed to Jackie, our guide, for her assistance in ensuring that the visit was the success it undoubtedly was.