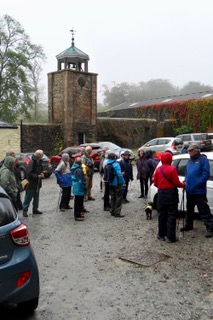 September saw a resumption of activities for the Branch with three separate events taking place over the course of the month. The last of our summer outings, a visit to Tor Royal, proved to be particularly popular, attracting a large number of members both from the branch and from other DA branches. Tor Royal is a Grade II listed building with a rich history. Despite the inclemency of the weather, participants gathered for a walk along the Conchies Road built by the Conscientious Objectors in World War I who were housed at Dartmoor Prison and made to work on its construction. A mile or so brought us to the Bronze Age cairn circle and cist locally known as the Crock of Gold from whence we made our way back to the farm where the cream tea which awaited us was more than usually welcome as was the chance to dry out and listen to a brief history of the house and its creators.

Two days later the Branch, in association with the Music Section of the DA and the Tavistock Subscription Library, hosted one of a series of lectures recreating a celebrated Concert Lecture of 1889. Entitled Uncle Tom Cobleigh and All, and under the expert guidance of Dr Todd Gray, this explored for the first time the fascinating history of Devon’s anthem “Widdicombe Fair” in words and song, including more than 50 variants, most of them long forgotten but brought to life by Paul Wilson and the Music Section.

The new season opened towards the end of the month with a fascinating talk on Ocean Changes by Guy Baker from the Marine Biological Association covering a subject very much in the news: the cutting-edge research taking place at the organisation’s laboratory in Plymouth where data from the new Continuous Plankton Recorder Survey has shown how warming oceans have led globally to unprecedented marine biological changes over the past decade in coral reefs, plankton, seabirds, macroalgae and fish, providing evidence of the response to higher temperatures and their impact on our ecosystems.

This was followed in October by Richard Horsham’s presentation on Dartmoor Boundaries, the history and construction of the many hundreds of miles of hedge-banks and walling erected to mark the boundaries of Dartmoor. Of particular interest were the corn ditches, introduced in the medieval period and created when the central area of Dartmoor was used as a hunting-ground by the Royal family and the aristocracy. Traditionally having a ditch and a vertical stone face against the moor and a sloping earth bank on the field side, these were designed primarily to deter deer and other animals from getting into the fields and to allow easy exit to those which had managed to get in.

Water again featured prominently in November in a talk given by Doug Herdson on life on the shore-line Between the Tides. Most of us have spent time exploring rock-pools inhabited by some of nature’s most fascinating creatures but how many know that crabs are right-handed or are familiar with the mating habits of barnacles? Returning in December, Doug literally donned another “hat” appearing as Charles Darwin to regale us with tales of Darwin’s special links with Devon and, in so doing, to bring our series of pre-Christmas lectures to a close.

Finally in late January a large gathering of members and guests assembled to enjoy the Branch’s increasingly popular Social Evening – a buffet supper, regrettably the last to be catered for by the ladies of the Tavistock & Gulworthy Women’s Institute who have given such superlative service for so many years, followed by a light-hearted and totally riveting excursion up the Tamar Valley with Helen Wilson and her amazing collection of postcards – a fitting end to a memorable evening’s entertainment.

You can see a list of all our upcoming events here.